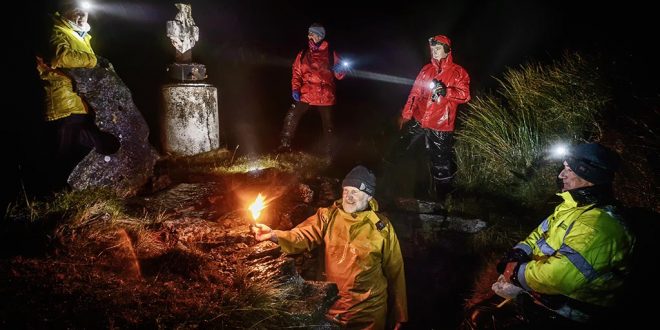 New Year's Eve at St Enda's Well, Slieve Elva, Fanore. Tom Doherty of Doolin Coastguard lights a torch to leave inside the well chamber, in memory of all who have lost their lives at sea over the past year, Looking on are, Celina Kennedy, David Courtney, former Coastguard helicopter pilot, John Galvin, MD Clare Champion and Joe Queally of the RNLI. Photograph by John Kelly.

Once you reach a certain age, New Year’s Eve should be spent in front of the telly, watching whatever rubbish is on, but sometimes you want to do something completely different.

This New Year’s Eve, I found myself in a car, heading for Fanore in the company of Joe Queally, RNLI stalwart and Dave Courtney, a former Coastguard helicopter pilot. Our mission was to climb Sliebh Elva and light candles for the souls lost at sea and for our own families.

Even leaving Ennis, the rain was coming down but by the time we hit Fanore and joined Doolin Coastguard, Tom Doherty and his partner Celine Kennedy, it was coming down like stair rods.

I confess, I wasn’t well prepared. I forgot to bring my waterproof trousers and had to borrow a pair from Tom. My boots weren’t best suited to the conditions either. I really needed wellies to properly deal with the lakes of water that flooded the trail. At times I had to take to the adjoining bog, which was churned up by cattle and I had to pick my way carefully to make sure I didn’t fall into any holes. In this I was aided by the one bit of equipment I got right. My ultra-bright LED head torch with its rechargeable battery pack was proving ferociously effective at cleaving through the dark and I found it quite easy to make my way carefully along.

About half way up the hill, we arrived at Joe’s home place, a cottage that had been abandoned some time in the 60s. As we lit a candle, we reflected that this was the first time in many years that a light had shone in the house. There are many such abandoned houses around and we felt we were lighting a candle for all of them that night.

We turned off all our torches and experienced the silence and solitude for a few minutes. Despite the appalling rainfall, visibility out towards the bay was excellent and we could clearly make out the Aran Islands and the coast of Galway. It really was a thought-provoking experience.

We moved on and shortly came to St Enda’s Well, not far from the summit. Here we lit more candles and I remembered my mother, Gemma, who left us two years ago almost to the night and my father, Flan, who joined her just six months later.

John Kelly also came with us to record the experience but the total lack of light was a problem. He had us all point our torches at each other to give him enough light to take the photo but without destroying the atmosphere with a harsh flash. While we were posing, I noticed that one of the lights had disappeared and with a sinking heart realised it was mine. I paid the price of that lovely bright light on the way up with a phenomenally short battery life. I’d be in trouble on the way down.

Even with the rain falling down on top of us, we took the time for hot chocolate and buttered Christmas cake before facing the road home. In truth, I could have stayed there a lot longer.
On the walk down, I had to rely on one of John Kelly’s photographic lights and it was very awkward keeping it in my hand while simultaneously trying to keep the rain off it but we all made it back safely – tired, wet but exhilarated.

Had I stayed at home that night, I would have been warm and comfortable but instead, I will never forget how I spent New Year’s Eve 2016.

I’ll be back to do it again next year but I’m bringing wellies – and a spare torch.