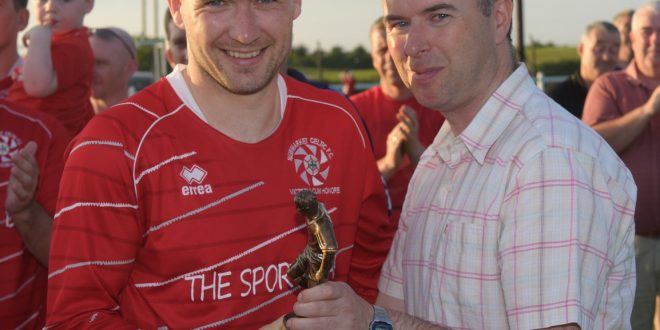 Eoin Hayes of Newmarket Celtic A accepts the man of the match award from Oliver Fitzpatrick, Clare League Chairman following their Soccer Cup final at the County Grounds. Photograph by John Kelly.

Chairman of the CDSL Oliver Fitzpatrick has confirmed he will not be seeking another term in the role.

The news comes on the same day that secretary Michael Lydon confirmed he is also stepping down, meaning an entire new top table will be elected at this year’s AGM.

Fitzpatrick hit out at some members of the committee in his email to clubs, the contents of which can be read below.

I would like to thank all clubs who supported me during my time on the committee but following a number of messages from Ronnie Pyne and Jason Ryan now is the right time to let you know I’m not seeking re-election for the 2020/21 season. Club and personal interests should not be put ahead of the interests of the League or Government/FAI guidelines on Covid-19 when you are on the CDSL committee.

I was happy to put in the work as your Chairman for the good of Clare soccer. For the most part it has been an enjoyable time on the committee with a lot of good work done. There was many highlights during my time on committee with winning 2 Oscar Traynor All-Ireland titles in a row, many great victories home and away in the Oscar Traynor over the top Leagues in the country, renaming of the County Grounds to Frank Healy Park, many great victories with the Clare Youths, installation of lights, installation of dugouts, planning permission granted for a new stand with ~€14K fundraised towards the project, loan on pitch & dressing rooms paid off, development of the pitch to ensure it was playable all year round, one of best groundsmen in the country Christy Ryan looking after it, new netting installed, new sponsorship, fundraising, starting up Women’s soccer, hosting of the FAI Festival of football & AGM, starting up & maintaining our website & social media, promotion of our games with pictures and introduction of awards nights to mention a few. Clare soccer has come a long way with some great work being done by a lot of our clubs in developing facilities and players. It’s a pity we have not brought home a Munster or FAI title yet but we are not far away and it will happen.

I have covered Fixtures Secretary for the last 2 seasons as no one else would do this job. If anyone had come forward they were more than welcome to the position as I said on many occasions. Ronnie Pyne was nominated for this position 2 years back but withdrew his name on the night of the AGM. He then sends me an email to say committee not happy with me doing this job. Life is too short.

It’s been a tough year for a lot of people and me personally as most people are aware. I thank everyone again for your kind words, calls and messages. I worked hard to ensure we got the 2019/20 season finished despite the efforts of certain individuals on committee to stop this. As preparations begin for the 2020/21 season now is the right time to leave it to a new committee to make the decisions here.

I would like to thank the executive committee members who supported and helped me during my time as Chairman especially Michael Lydon, Donie Garrihy, Frank Gormley, Frankie Burke and Alfonso D’Auria. Best wishes to everyone, stay safe and as Michael said earlier all correspondence and future queries should go to Ronnie Pyne vice chairman.

Yours in Sport,
Oliver Fitzpatrick