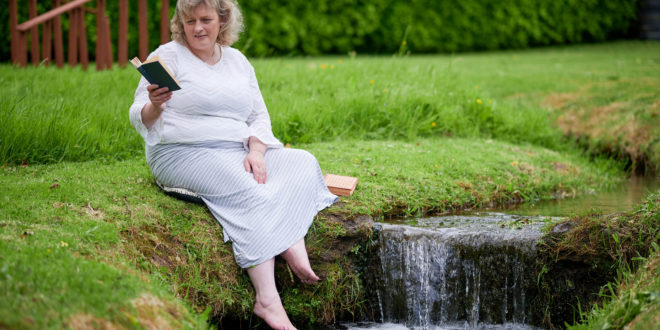 Mountshannon’s Roisín Bugler, co-ordinator of the radio programme called 'A Flow of Words', a literary broadcast of poetry and prose, which will go out on Scariff Bay Community Radio 88.3 and 92.7FM and also on www.scariffbayradio.com on May 31st. Photograph by John Kelly.

THE Mountshannon Arts Festival will take place this weekend, but not in its traditional format. The creativity and ingenuity of the organisers mean that key elements of the festival programme will now transfer online, on-air and to a special ‘sound sanctuary’ on the shores of Lough Derg.

Faced with the restrictions associated with the Coronavirus, the committee has devised an innovative new programme. Among its highlights will be an exhibition of photographs on the theme of ‘Identity’, on the windows of a premises in the town, as well as a ‘The First Sanctuary of Free Sounds’ a special installation located at the harbour. On YouTube and Facebook, next Saturday and Sunday, there will be a specially commissioned conversation between former Wexford hurling captain Diarmuid Lyng and theatre-maker Timmy Creed.

As part of the re-worked festival programme, Scariff Bay Community Radio has stepped in to support on-air events on Sunday. Among those will be an interview with musician and foodie Mike Hanrahan at 2pm, as well as ‘Stories from the Shore’ at 8pm. Presented by Carol McNamara, the show will feature storyteller Órla McGovern, interacting with contributors from far and near. At 2.30pm, a special edition of the very popular ‘A Flow of Words’ will take to the airwaves. That show is presented by Mountshannon writer and poet Roisín Bugler, who has been a pioneer of literary broadcasting in the region.

“Radio has been a great anchor in recent weeks,” Roisín noted, “and Scariff Bay Community Radio is an amazing asset, particularly in these challenging times. Because of the coronavirus restrictions, we’re reimagined ourselves as the Mountshannon Arts Wireless Festival and we’ve called on all of our local assets and strengths to help us to retain some of the core events we had planned.”

Roisín is a regular broadcaster on Scariff Bay Community Radio and ‘A Flow of Words’ is a monthly highlight of its schedule. The show invites contributions for published and un-published writers and exemplifies the openness and inclusivity of the station.

“My former national school principal, Jim Collins, is the manager of the station,” Roisín explained. “He’s the driving force and always open to new ideas. I’ve always been interested in writing myself, and the monthly show has brought together people like Mickey Griffin and Michael Durack as well as a host of other writers.”

As part of last year’s arts festival, ‘A Flow of Words’ was broadcast live from a barge in Mountshannon, and while this year’s Covid-19 restrictions won’t allow for a repeat of that event, the show will go on in a revised format. “People have been recording and sending in their audio clips and Jim will put them together, so we’re hoping as many people as possible will listen on FM or on the TuneIn app next Sunday.”

Poetry from ‘A Flow of Words’ will also form part of the local response to the lockdown and re-opening of the country, particularly for those who have been cocooning. “I think we all need a bit of escapism right now,” Roisín noted. “Poetry is definitely having a moment.” With that in mind, a collection of poems, gathered locally ahead of this year’s Poetry Day, are to be included in a wellness pack which will shortly be distributed by Clare County Council. “We have around ten poems by people who have been contributing to ‘A Flow of Words’ and we them up in a booklet. Patricia Anne Moore, who is involved with Clare Age Friendly and the community radio station, mentioned the idea to the Council and they’re going to print up more booklets to put into wellness packs which they will be distributing as part of the response to the coronavirus.”

Scariff Bay Community Radio broacasts on Saturdays and Sundays on 88.3FM in Scariff, Mountshannon, Feakle, and on 92.7FM in Tulla and Broadford. It is also available on the TuneIn app and on scariffbayradio.com.

Fiona McGarry joined The Clare Champion as a reporter after a four-year stint as producer of Morning Focus on Clare FM. Prior to that she worked for various radio, print and online titles, including Newstalk, Maximum Media and The Tuam Herald. Fiona’s media career began in her native Mayo when she joined Midwest Radio. She is the maker of a number of radio documentaries, funded by the Broadcasting Authority of Ireland (BAI). She has also availed of the Simon Cumbers Media Fund to report on development issues supported by Irish Aid in Haiti. She won a Justice Media Award for a short radio series on the work of Bedford Row Project, which supports prisoners and families in the Mid-West. Fiona also teaches on the Journalism programmes at NUI Galway. If you have a story and would like to get in touch with Fiona you can email her at fmcgarry@clarechampion.ie or telephone 065 6864146.
Previous Fundraising cycle for Samaritans surpasses target
Next One New Case Of Covid-19 Confirmed In Clare With Nine More Deaths Nationwide