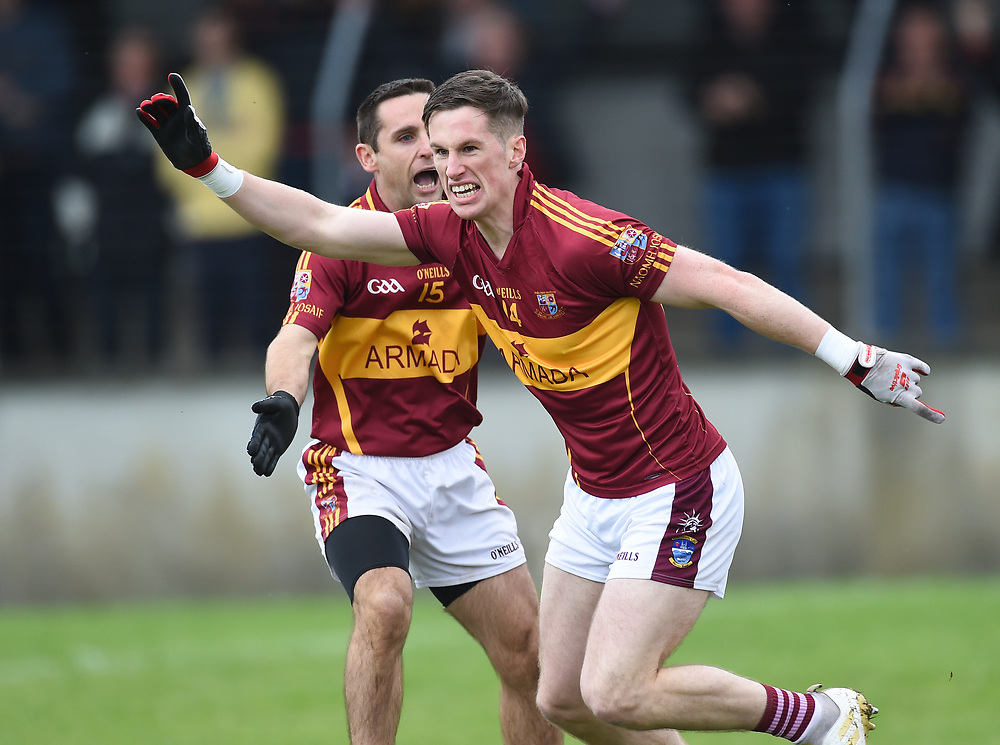 There are a few clichés that could sum up this game. A game of two halves, not exactly one for the purists, and a tale of goals winning matches could all come close to summing it up.

In reality, it was all about the side that made the most of their scoring chances and in that respect Miltown were full value for their narrow win. On a day when torrential rain swept across the field for the majority of the contest, it meant handling conditions were far from ideal and scoring chances were at a premium. It also meant that the side who kept their goals intact would take a big step toward victory, and two brilliant stops by Miltown net-minder Sean O’Brien were match winning moments in this contest.

County team-mates Gary Brennan and Gordon Kelly had a brilliant battle right throughout the game while Cillian Brennan was tasked with marshalling Eoin Cleary in the Miltown attack. The middle third was always going to be a critical sector and while the elder Brennan stormed into the game in the second period, it was an effort that just came up short of the winning post. Clondegad started with Tony Kelly at full-forward and he also proved a handful for the Miltown defence.

Clondegad’s opening score of the game and only score of the first-half arrived after three minutes through Joe Neylon, as he profited from good work by Brian Carrig and Barry Toner to split the posts.

That 0-1 to 0-0 lead lasted until 18 minutes into the contest, when Graham Kelly’s pressure on the Clondegad defence yielded a free for his side which was duly converted by Eoin Cleary. Both sides struggled with the conditions and were guilty of some wasteful shooting while the turnover counts were significant across the board.

Goals were always going to be worth much more than just their scoreboard value in a game like this, and it was Clondegad who were presented with the first big opportunity when Gordon Kelly was adjudged to have fouled Gary Brennan inside the square. Brian Carrig stepped up to the spot, but saw his shot expertly saved by Sean O’Brien who got down low to his left to turn it away.

It was a moment that seemed to spark Miltown into life and they hit the front moments later when a neat one-two between Cormac Murray and Eoin Cleary finished with Cleary dropping the ball over the crossbar from 20m out. It went from bad to worse for Clondegad in the closing stages of the opening half as a precise pass from Gearoid Curtin picked out the ever willing Murray, and he powered through before slotting home a neat finish past Liam Deasy to put his side 1-2 to 0-1 clear. As all good sides do, Miltown kept their foot on their opponent’s throat and it was Cleary who landed the final score of the half as he turned over possession from the kickout before landing a great score from the right hand side to leave them five points clear heading for the dressing rooms.

With no let up in the wind and rain, the third quarter of the game produced no more on the scoreboard as both sides continued to struggle for clean possession. As has so often been the case at both club and county level, Gary Brennan’s influence on the contest began to show and he rattled off three unanswered scores in as many minutes to leave just two points between the sides. The first came from what looked like a difficult free on the right wing after Tony Kelly was fouled. Brennan made light of the angle and the wind to float it over, before racing through from the re-start to flash a shot just over Sean O’Brien’s crossbar. Another free from a more central position followed and suddenly Miltown led by just 1-3 to 0-4.

O’Brien was the hero of the hour once more as he produced an outstanding reflex save to deny Clondegad what would have been a huge score. Tony Kelly’s dangerous delivery was flicked toward goal and it looked destined for the bottom corner before O’Brien threw himself across to his left to deflect it onto the post and followed up by clawing the ball to safety. It was a fantastic save coupled with real bravery as a whole host of bodies were queuing up to try and poke the rebound home. It still yielded a Clondegad score as Brennan stroked over the resultant 45m free, but it meant that the lead was still in Miltown’s hands, albeit by the minimum.

Miltown needed a score to stem the tide and it came when Darragh McDonagh’s incisive run in-field was stopped illegally and Cleary arrowed over the free to give them a two point cushion. Cool heads were needed in the closing stages, and when Clondegad were awarded  a free on the 20m line it looked like the perfect opportunity to cut the gap back to one. It was taken quickly to try and pick out on the onrushing Brennan but O’Brien was alert once more and he cut out the danger. Colin McNeilis brought it back to a one point game with a fine score from distance as injury-time loomed, but Miltown showed huge composure in the closing minutes to see the game out and claim their first Cusack Cup title since 2010.