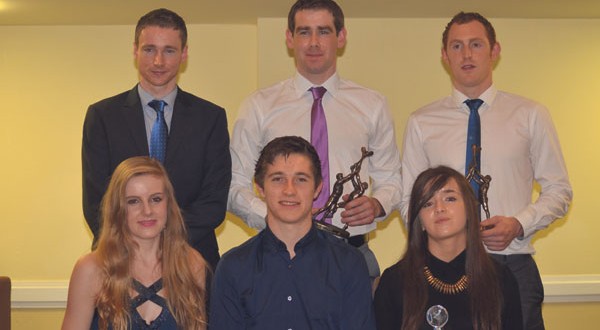 THE Inn at Dromoland was the venue last week for a gathering of 340 people from O’Callaghan’s Mills, to honour the sporting achievements of parishioners during 2013.

Christy Philpott was the master of ceremonies and he met the main recipients, Colin Crehan and Ella Donnellan, who won handball world titles; Louise McCagh, the first Irish lady to win a Taekwando senior world title; Patrick Donnellan (captain) and Conor Cooney, both members of the Clare senior hurling team that won the All-Ireland title and Sean Hehir, winner of the Dublin City Marathon.

Christy was assisted on stage by Davy Fitzgerald, Clare hurling manager and by Joe O’Gorman.

Amongst the gathering was Sean Hehir’s coach, Dick Hooper, who represented Ireland in the marathon at three Olympic Games in 1980, 1984 and 1988. Also present were Arthur Forde, athletics coach from Ennis; Joe and Theresa Cooney, parents of Conor;  Patrick’s parents Stevie and Mary Donnellan and many others.

As this was a night of celebration for all sports stars within the parish, presentations were also made to successful athletes Angharad Loughnane, Cushly Murphy Hehir and Alannah Ryan and the Féile handball girls and boys, who made history by winning the U-14 Féile Division 1 titles, the first ever club to win both in the one year.

Kilkishen Celtic, on winning the second division in the Clare District Soccer League, were also honoured, while the camogie club presented their medals to both its senior B and Junior B shield winning teams.

The GAA club also presented the senior team on winning the West Munster League and their Junior A League champions. Over 145 presentations were made during the evening.

Once these presentations were completed, Davy Fitzgerald addressed the large attendance.  He acknowledged the sacrifices made by so many people, including parents, coaches, managers and the players themselves.  He also made reference to his association from a young age with the Mills club, as he was a spectator at many matches with his uncle John, who is currently the joint president of the club.
A special presentation was made to the Clare manager by Conor Cooney.