Home » Regional » North Clare » Prom to reopen before the weekend 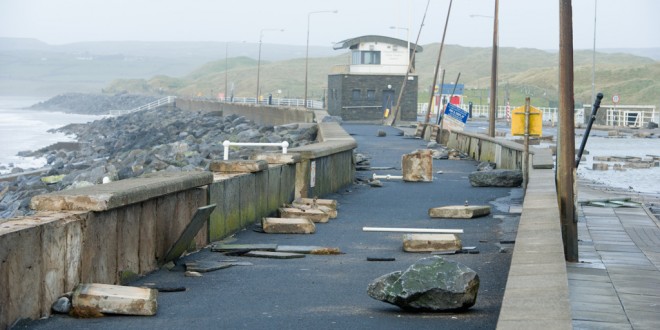 Debris is strewn across Lahinch promenade. Photograph by John Kelly.

THE Promenade in Lahinch is set to reopen within days, while other facilities in the North Clare resort will take much longer, it has been confirmed.

The surface of the prom, its railings, signs and the adjacent car park were badly damaged by the “ferocious” storm that hit the country last weekend.

Commercial buildings in the area were also damaged by flooding and waves, which reached higher than many buildings on the prom. Lahinch Seaworld is closed until further notice because of flooding and associated damage, estimated to cost tens of thousands of euro. The nearby playground is also closed until it has been assessed by engineers.

Clare county manager, Tom Coughlan described the damage to the prom as “extensive and damaging to the local economy in the short term”.
“The objective of Clare County Council is not just to repair the damage but to put in place facilities which will further enhance Lahinch as a tourism destination.

“We envisage such a development must be fit for purpose in terms of its capacity to deal with weather conditions such as those experienced in recent days, while at the same time serving the needs of the local community and visitors to the town,” he continued.

In Doolin, the road surface leading to the pier was lifted in places and the nearby car park was covered in rocks washed in by the waves. Offices used by ferry operators and the Doolin unit of the Irish Coast Guard were water damaged.

While the surface of the road to the pier and the railings encompassing it were warped in the storm, the pier itself escaped without serious damage, Clare County Council’s senior engineer has said.

“I am not aware of any structural damage to the pier,” Tom Tiernan told The Clare Champion. However, he said there was some damage to the infrastructure associated with the pier, including safety railings.

“There are signs up there that the storm was absolutely ferocious. Some of the impacts are incredible. The size of some of the boulders that were moved around by the wind and the waves, and that crashed up onto the shore, the way the road and car park surfaces have been basically ripped asunder needs to be seen to be believed. That is something that we have about two and half months to rectify and make that facility fit for purpose,” he said.

A new pier is planned for Doolin and the council is currently assessing tenders, with a view to work beginning on it later this year.
“The assessment process is nearly completed at this stage and we are hopeful we will be able to get that contract underway in the near future,” Mr Tiernan stated.

“This particular event doesn’t make any difference to the urgency of the new pier. The new pier is urgent anyway,” he commented.

The private trail of storm destruction