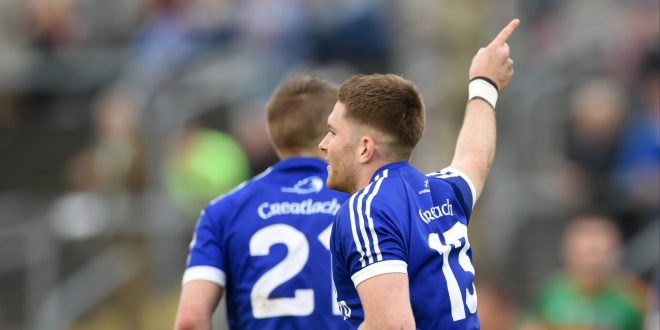 Cathal Mc Inerney of Cratloe celebrates his equalising point against Kilmurry Ibrickane late on during their county final in Cusack park. Photograph by John Kelly.

CRATLOE’S Cathal McInerney showed his class and composure when he steered over an injury time equalising point, to rescue a draw for his side and ensure a replay on Saturday or Sunday week in the 2016 Clare senior football final. The last drawn county final was in 2003 when Kilkee beat Kilrush in the replay.

McInerney steered over the equaliser following a foul on Cratloe’s John Galvin, who was one of two players yellow carded following a brawl at the end of the first half. The incident happened as both sets of players were returning to their dressing rooms, through the communal tunnel. The respective dressing room doors, which lead directly to the field, were locked, therefore both teams had to use the tunnel. Before the second half started, referee Rory Hickey yellow carded Galvin and Kilmurry’s Mark McCarthy, while he showed a straight red card to unused Kilmurry substitute John Willie Sexton for his part in the incident.

Kilmurry led 0-8 to 1-4 at half-time, largely thanks to two superb Keelan Sexton points, while goalkeeper Ian McInerney landed a free and a 45 with Shane Hickey, Niall Hickey and Enda Coughlan putting over a score apiece.

McInerney showed ice cool nerves to finish Cratoe’s goal 19th minutes into the first half. Ironically the goal was scored after Kilmurry had lost their own kick out. Until that stage the had won all of Ian McInerney’s restarts.

Cathal McInerney also put over two first half points, with David and Podge Collins also pointing for the 2013 and 2014 champions.

The game was level eight times in total. Three minutes into the second half, Kilmurry led by two points, 0-9 to 1-4 and that was the biggest advantage at any stage of the hours football.

Seven minutes from time Sexton pointed a free won by Michael O’Dwyer, following a foul on John Galvin to put Kilmurry 0-12 to 1-8 ahead. The game was in the balance at that stage and Kilmurry will rue some missed chances from Noel Downes and Sexton. Downes did well in general play when introduced and pointed once but he could have kicked at least a further point.

Galvin then won that injury time free and McInerney did the rest to ensure a county final replay. This game was an intense contest even if the quality was not always top notch. The teams gave the ball away too many times, especially in the first half.

A more comprehensive report will appear in Thursday’s Clare Champion along with after match interviews and analysis.