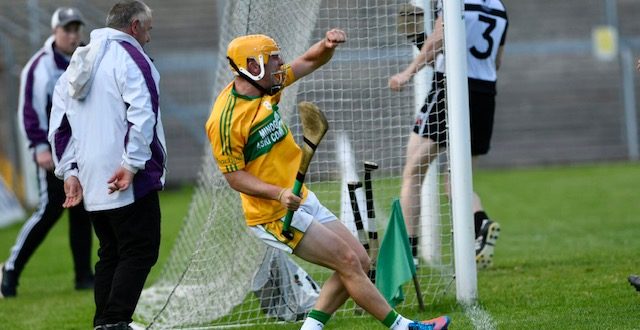 Feakle's Shane McGrath celebrates his goal in their Clare SHC clash with Clarecastle in Cusack Park. Pic by Eugene McCafferty

Feakle came to Cusack Park with an axe to grind after suffering defeat to the Magpies in the 2017 relegation decider, but by the time the final whistle blew it was well and truly buried.

The East Clare side produced a ruthless display to power their way into the quarter-final draw with Shane McGrath firing 4-10 over the course of an impressive performance.

The writing was on the cards early in the contest as Feakle raced into a 2-8 to 0-2 lead inside the opening quarter. McGrath raided for both his sides goals, with the first coming as he pounced on a break before lashing home a brilliant finish to the far corner. The second was all about persistence as he saw his initial effort hooked but he followed up to whip home and give his side 12 point cushion at the first water break.

It was a young Clarecastle side, with nine of their starting 15 still U-21, and they settled in the second quarter to reel off four points without reply to cut the gap to eight points. They will rue missed chances in this period with two goal opportunities going astray which could have gotten them back into the contest. Feakle arrested the slump to fire four of the last five scores of the half to end the tie as a contest as they led 2-12 to 0-7 at the half-time whistle.

Any faint hopes of a revival were dashed for good within minutes of the restart as a quickfire brace of goals saw Feakle extend their lead 17 points. The first was a tidy finish from Martin Daly after being played through by the lively Steven Conway, and worse was to come for Clarecastle as McGrath wrapped up his hat-trick by lashing home the rebound after Oisín Donnellan’s shot had cannoned back off the woodwork. The icing on the cake arrived just before the second half waterbreak, as McGrath continued his assault on the championship top scorer accolade. He made no mistake with a penalty after Martin Daly had been fouled, and as the final quarter loomed it was Feakle 5-14 to 0-9 in front.

Clarecastle did finish the game well with goals from Conor Halpin and Stephen Ward in the closing period but it was pure cosmetics with the outcome long since decided.