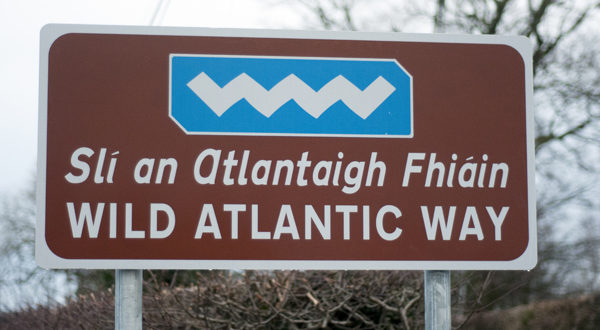 UPGRADES are being sought for a heavily trafficked section of the Wild Atlantic Way running through North Clare to the Cliffs of Moher.

The call came at the meeting of the West Clare Municipal District when Councillor Joe Killeen said local people and visitors alike would benefit from improvements to the route from Ballyvaughan, through Fanore and Doolin. “There are around 1.5 million tourists using this route every year going to the Cliffs of Moher and traffic is often tail-to-tail,” he said. “I was on the road recently when four cars pulled over to look at a fishing competition. Until they returned to their cars, nobody could pass. This area is the jewel in the crown of the Wild Atlantic Way and there are issues with the road surface and alignment, as well as a lack of areas to pull in.”

The Corofin native noted that the Tánaiste, Leo Varadkar had recently visited Ballyvaughan and that action needed to be taken with the road on the Gleninagh side.

“Hedges along this route are strong due to the good land,” he added. “It can be hard for cars to pass in places, though I accept that a severe cut cannot be done until September.”

Cathaoirleach, Councillor Joe Garrihy, said that he lives along the route in question and that it is “one of the most attractive drives in Ireland”. “This is the most beautiful route to the Cliffs and we need to address traffic. There is a lot of frustration for local people and visitors. When I was canvassing on this road last year, this was one of the biggest issues raised.”

A written response from Enda MacNamara, Senior Exeutive Engineer, noted that resurfacing works are not included in this year’s works schedule, but that they may be listed next year. “Hedge growth along the R477 will be reviewed,” the response stated. “Due to limited budget, Clare County Council is unable to trim hedges along all regional roads. Priority is given to areas that are deemed health and safety risks. The MD office will write out to landowners advising them of their responsibilities under Section 70 of the Roads Act 1993, to maintain trees, hedgerows, etc, on or inside their boundaries adjacent to public roads.”

The reply also noted that a Community Hedge Cutting Grant Scheme for community groups, residents and landowners, will be advertised this month.

Senior Executive Officer, John O’Malley drew members’ attention to a reference in the response to a review of the route in conjunction with Fáilte Ireland. “Significant progress has been made,” Mr O’Malley said. “When the group meets again in late August, we will have more information.”

Fiona McGarry joined The Clare Champion as a reporter after a four-year stint as producer of Morning Focus on Clare FM. Prior to that she worked for various radio, print and online titles, including Newstalk, Maximum Media and The Tuam Herald. Fiona’s media career began in her native Mayo when she joined Midwest Radio. She is the maker of a number of radio documentaries, funded by the Broadcasting Authority of Ireland (BAI). She has also availed of the Simon Cumbers Media Fund to report on development issues supported by Irish Aid in Haiti. She won a Justice Media Award for a short radio series on the work of Bedford Row Project, which supports prisoners and families in the Mid-West. Fiona also teaches on the Journalism programmes at NUI Galway. If you have a story and would like to get in touch with Fiona you can email her at fmcgarry@clarechampion.ie or telephone 065 6864146.
Previous Ennis priest shares memories of the late John Hume
Next McGrath Shoots The Lights Out As Feakle Fly Into Clare SHC Quarter Finals