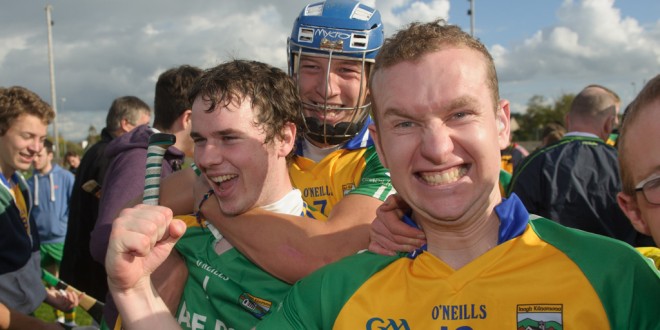 Paul Keating, Brian Foudy and Gary Lafferty of Inagh-Kilnamona celebrate after beating Clonlara in the Junior A final at Clarecastle. Photograph by John Kelly.

McCarthy points the way for Inagh-Kilnamona

A haul of eleven points from teenager Jason McCarthy steered Inagh-Kilnamona to the Clare junior A hurling championship title when they proved too strong for Clonlara at sun splashed Clarecastle on Saturday afternoon.

A goal from full forward Dermot Gannon, eleven minutes into the game gave the winners a six point lead (1-5 to 0-2) after a quarter of an hour. P_laying with the assistance of the breeze, Clonlara fought back and when the half time whistle sounded they were just three in arrears, 0-6 to 1-6.

The South East Clare side scored the first two points of the second half to move to within a point of the winners but that was as good as it got and Inasgh-Kilnamona hit back with seven unanwered points to lead by eight inside the final quarter.

Clonlara made a number of changes in an effort to get back into contention but Inagh-Kilnamona had the better balanced outfit and they held on for a merited victory n a day when Sean Mahoney, Thomas McConigley, Ronan O’Looney and Jason McCarthy impressed.

Meanwhile, Wolfe Tones are back in senior football after just a year thanks to a one point win (1-10 to 2-6) over Corofin in the replay of the intermediate football final at Hennessy park in Miltown.

The Shannon club’s dream of a second adult championship title this year ended at Gurteen when their junior B footballers suffered a one point loss (0-6 to 0-7) to Clarecastle.

Meanwhile Whitegate a step closer to completing the junior B hurling league and championship double when they defeated Broadford (2-11 to 0-12) at Bodyke. In the final they will play either Wolfe Tones or Ballyea

In the senior hurling league (Clare Champion cup), Crusheen booked a place in the semi-final when they bounced back from their championship final loss last week to record a 2-12 to 1-12 win over Sixmilebridge. In the semi-final they will play Clonlara.