A man in his 60’s has been rescued from the River Fergus.

Gardaí were alerted around 9.30 last night after a man got into difficulty close to the bridge on the N85 ring-road near Clareabbey in Clarecastle..

Three units of the Ennis Fire Service, including a specialist Swift Water Rescue Team, were sent to the scene, while the Doolin unit of the Irish Coast Guard was also alerted, but was later stood down.

Members of An Garda Síochána located the man beneath the bridge and attempted to reach him by wading into the water before fire service personnel brought him to safety.

The man was transferred into the care of the ambulance service. 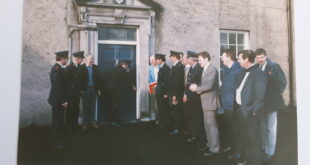 Clare memories sought for oral history of An Garda Síochána