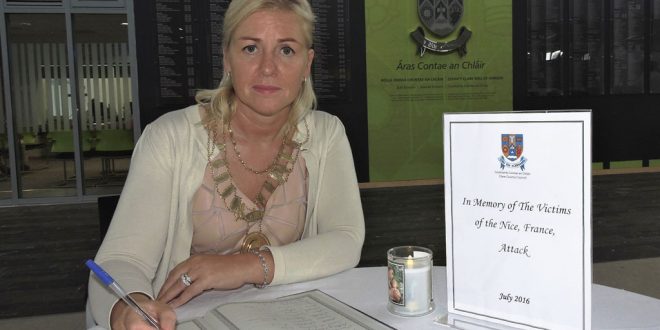 Mayor of Ennis Councillor Ann Norton signs a Book of Condolence which has been opened at Áras Contae an Chláir in Ennis in memory of the victims of Thursday night's attack in Nice, France.

Book of Condolence for victims of Nice attack

Clare County Council has opened a Book of Condolence at Áras Contae an Chláir in Ennis in memory of the victims of last night’s attack in Nice, France.

“I wish the people of France strength as they seek to overcome yet another senseless attack but I am confident that the abiding principals of Liberté, Égalité, Fraternité will never be diminished by those who oppose them,” he said.

Ennis is twinned with the southern French town of Saint-Paul-de-Fenouillet, which is located west of Nice on the Mediterranean coast.

Mayor of Ennis Councillor Ann Norton said, “On behalf of my colleagues in the Municipal District of Ennis, I wish to extend our sympathy and support to the people of Saint-Paul de Fenouillet and France in the face of such a brutal and indiscriminate attack. This Book of Condolence affords the people of Ennis and Clare the opportunity to send messages of support to those caught up in this terrible tragedy.”

Councillor Paul Murphy, Leas Cathaoirleach of Clare County Council was representing County Clare at a Bastille Day celebration at the French Embassy in Dublin last night when the Nice attack began to unfold.

Members of the public are being invited to sign the Book of Condolence during opening hours (9am to 5pm, Monday to Friday) at the corporate headquarters of Clare County Council, Áras Contae an Chláir, Ennis.

The Book is available until Friday, July 22 after which it will be delivered to the French Embassy in Dublin.