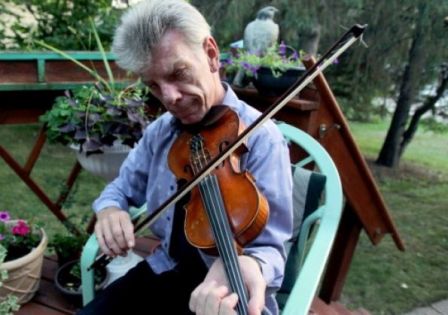 Maurice Lennon performs at the 2014 Feile Cnoc na Gaoithe in Tulla. The centre is one of the beneficaries of town and village renewal funding.

Nine towns and villages in Clare have been allocated grants totalling €944,000 under the Town and Village Renewal Scheme.

A figure of €200,000 will be provided under the scheme for Tradaree Food Hub in Newmarket- on- Fergus.

A sum of €100,000 each in funding will be given towards building conversions for digital hubs in Kilrush and Kilkee, the
multi-service innovation centrein Ennistymon, the streetscape rejuvenation in Clarecastle, the Cnoc na Gaoithe expansion in Tulla, the community centre refurbishment in Miltown Malbay and the economic gateway project in Scarriff/Tuamgraney.

Furthermore, €80,000 is nbeing provided for the pier and camping area in Kildysart and €64,000 for the development of two walks in Doonbeg.

The scheme, which was launched in April, focuses on projects which can help to enhancen and develop rural towns
and villages, with a particular emphasis on stimulating economic development.

“A particular emphasis has been placed on projects which have the capacity to support the economic development of rural town and villages as well as their neighbouring town-lands,” Minister for Trade, Employment,Business, EU Digital Single Market and Data Protection Pat Breen said.
“I would like to pay tribute to Clare County Council for their efforts and co-operation in engaging with local and business
communities to identify these projects. Most of the funding will benefit towns and villages, with populations of less than
5,000 people,” he pointed out.

This is a good news story for Clare because it breathes lifen into rural communities and it is in line with one of the key
objectives of the Clare Rural Development Strategy, as well as the County Clare Local Economic and Community Plan,”
Pat Dowling, chief executive of Clare County Council, said.

“Funding was received for all applications submitted by Clare County Council, which represents a very important
endorsement of the quality of projects submitted and of the close working relationship that exists between communities
throughout Clare and the local authority,” he said.