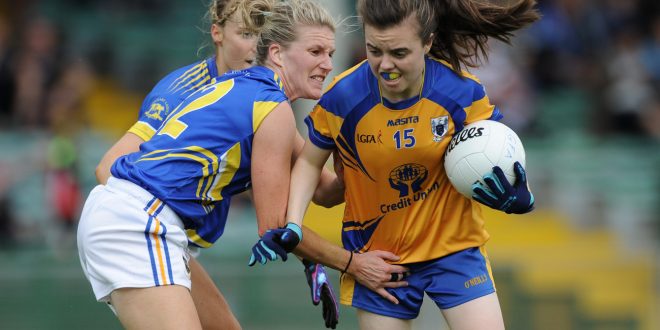 Twenty seven years to the day that they were crowned Clare senior camogie champions, Eire Og regained senior status with an impressive 1-14 to 1-9 victory over Clarecastle-Ballyea at Clareabbey this Saturday afternoon.

A five star performance by midfielder Grainne Nolan who contributed 0-13 of her team’s tally, played a key role in this victory.

Clarecastle-Ballyea, beaten finalists last year, led at the break on a score of 1-7 to 0-5 having played with the aid of the wind. The margin was still five points ten minutes into the second half after each side had added two points to their half time tallies.

However, Clarecastle-Ballyea failed to score in the final twenty minutes and with thirteen minutes remaining the sides had drawn level at 1-9 each, the Eire Og goal having come from Elizabeth Russell whose effort for a point dipped into the net.

With eleven minutes remaining Nolan put her side in front and a minute later she made a timely intervention to deny Clarecastle-Ballyea a score. She had put her side two points clear when Clarecastle-Ballea attacked again only for Doireann Murphy’s effort to rebound off the crossbar.

Three points from Nolan in the final five minutes sealed a memorable day for the town side and after the game Brid McNamara presented the Fr. Liam Murray cup to the winning captain Chloe Devitt amidst great scenes of celebration