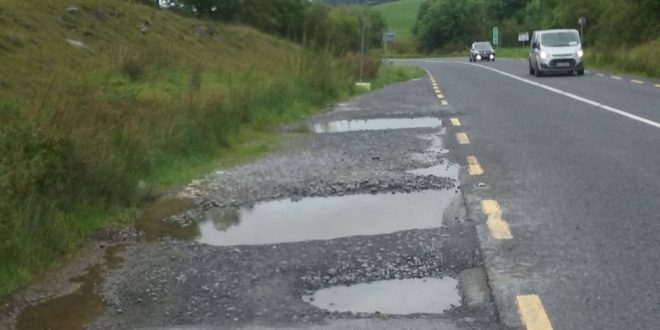 The potholes on the lay-by on the N85 at Kilnamona.

Lay-by potholes ‘the size of craters’

POTHOLES “the size of craters” in a lay-by along one of the busiest routes in the county are to be brought to the attention of the gardaí.

Councillor James Breen has vowed to make contact with gardaí in Ennis and Ennistymon in a bid to prevent farmers and those driving heavy machinery from being prosecuted for not pulling in to allow cars pass due to the state of the lay-by.

At this week’s meeting of the Ennis Municipal District, the councillor urged that the passing bays on the N85, both east and west of Kilnamona Cross, be upgraded.

Photographs of the waterlogged potholes were presented to the council, with Councillor Breen saying that he will also be sending the images to the gardaí.
Councillor Breen stated, “I was going to bring my dog with me to take the photographs to show the size of the holes. He’s a fairly big dog but I was afraid he’d get drowned.”

He continued by saying that those driving tractors and trailers “couldn’t be expected to pull in there. It’s one of the busiest stretches of road in the county on the way to the Cliffs of Moher and this is not good. The gardaí in Ennis and Ennistymon should be sent on these photos so they don’t bring in some farmer, who is not able to pull in his tractor to allow the cars pass.”

Barry Conway, executive engineer, replied to the motion, “Tenders are currently being sought for the resurfacing of a 2.8km stretch of the N85 in Kilnamona, west of Kilnamona Cross. It is the intention of the municipal district to engage the successful tenderer to carry out improvement works to these layby areas, subject to funding being made available by the TII.”

Councillor Paul Murphy commented that pulling in at these lay-bys would “do damage” to machinery.

Councillor Mary Howard described the area as “in an appalling state” and “a typical example of what roads are like in Clare”. The lay-bys were described as “embarrassing” on an “abysmal road” by Councillor Clare Colleran Molloy.

Councillor Pat Daly said it was a “disgrace” and he urged that a council delegation meet with Transport Infrastructure Ireland in the future to bring the matter to the body’s attention.

Mayor of Ennis Ann Norton stated, “Unfortunately, this isn’t a TII issue, it’s a Clare County Council one”. She said that pressure needs to be put on the county’s Government representatives to improve funding from Government for local roads.

Leonard Cleary, acting director of services, outlined to the councillors that there have been “significant” cuts in roads funding in the order of 50% in recent years. He accepted the statements made in relation to the condition of the road, saying “it’s very difficult with such scare funding in roads grants”.

He added that a strong case needs to be made that the funding reduction is unsustainable.

Previous Puppy cruelly dumped and left to die
Next Council spent more that €500,000 on the Fleadh