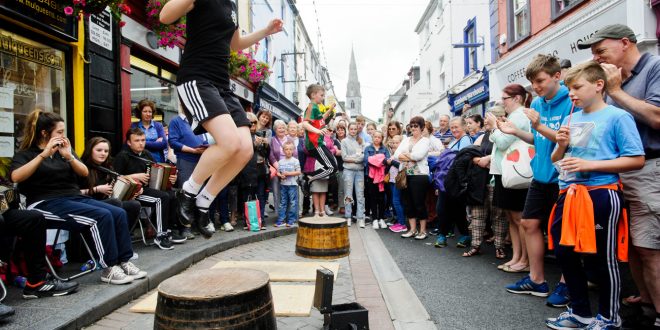 CLARE County Council spent more than half a million euro on the hosting of Fleadh Cheoil na hÉireann in Ennis, it has been confirmed.

The local authority spent €560,000 on the Fleadh, in addition to the council’s direct financial contribution of €75,000 to the event. The estimated spend by Comhaltas on the Fleadh was in excess of €1.1 million.

According to Ger Dollard, interim chief executive of Clare County Council, the local authority’s contribution was used to pay for promotional activities, improvements to infrastructure and enhancements to the town.

Outlining a report on the aftermath of the festival to members of the Ennis Municipal District this week, Mr Dollard stated that the benefit to the county from the Fleadh was “overwhelmingly positive”.

He said, “The overall perspective is that Ennis was presented very well and performed very well.” A number of debriefs are currently underway among the various agencies involved with the Fleadh. However, Mr Dollard said that, overall, it has been viewed as “an outstanding success”. He commented that the interaction of the different agencies worked well.

Council resources used as part of the festival included making Áras Contae an Chláir available as Fleadh headquarters and Lees Road for the marching band competition. A Luminarium and the Shannon Aerodrome were installed at Tim Smythe Park, with remedial work now needed on the park’s surface, following their removal.

Other measures provided by the council were lighting throughout the town centre, the installation of a light with the Fleadh logo in front of Clare County Council headquarters and the setting up of the Visit Clare Expo, in conjunction with Clare Tourism.

Day tours of the county were organised by Clare Tourism, Fleadh-themed art installations were installed at roundabouts and close to 400 people attended the Riches of Clare lunchtime concerts, supported by the arts office. Ennis library played host to singing workshops and the arts office also supported the launch of a song book during the Fleadh.

An extensive street cleaning programme was put in place by the council for the Fleadh week, enhanced by the work of TidyTowns and volunteers operating under the Clare Volunteer Centre. The council also provided facilities at Ennis Fire Station and the fire service liaised with Comhaltas in the run up to and during the event. The service was on standby during the peak Fleadh period and they did not have to respond to any Fleadh-related incidents.

Other figures released by the council showed that 76 patients were treated by medical staff during the nine-day event. Twelve people received medical centre treatments, with five transferred to hospital. One-hundred and six medics were on duty during the Fleadh, with the Civil Defence supported by a member of the National Ambulance Service.

A number of workshops were held by staff of the environment department, as part of the Green Fleadh initiative and the council’s paint scheme was availed of by 41 businesses.

Mr Dollard said the council is aware that some changes need to be made ahead of Fleadh 2017, with the aim to “step above” this year’s event.
Among the lessons learned from this year’s Fleadh is the possible need for improved traffic signage, he outlined.

“A detailed and extensive traffic management plan was formulated, in respect of the overall management of the event. This required very significant support from An Garda Siochána in the implementation of the plan. Overall, the traffic management worked exceptionally well for the entire event. Feedback would indicate some improvement in signage detail may be required but, by and large, the fundamental elements of the plan worked very satisfactorily,” he stated.

He acknowledged the staff of the local authority and volunteers for their assistance and said that the event was not just a success for Ennis but for the entire county.

“The hosting of Fleadh Cheoil na hÉireann was a major boost for Ennis and the wider county from a social, economic and cultural perspective. The successful delivery of the event was the result of an effective partnership between Comhaltas, the statutory agencies and the wider community.

“The high standard of overall co-ordination and management of the event was a result of the extensive advance preparatory work and the excellent working relationship between the principal response agencies of Clare County Council, including the fire service and Civil Defence, an Garda Siochána and the Health Service Executive. All agencies will be undertaking individual and a collective debrief and review of the event.

“The opportunity to promote Ennis and County Clare was also maximised through the various activities and programmes and will further brand Clare as an excellent place to visit and spend some time.”

He concluded by stating that the council looks forward to beginning the advance preparation for Fleadh 2017.