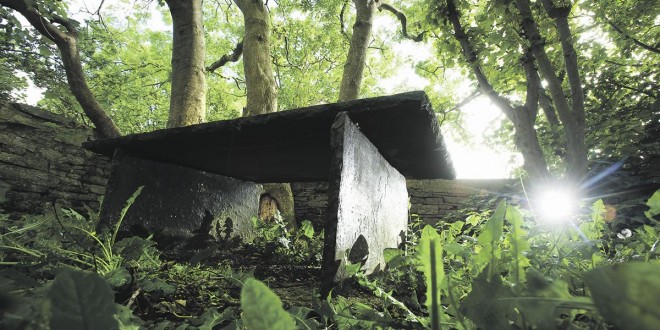 A view of what is believed to be a burial site for stillborn children, who were born at the old Kilrush District hospital maternity unit. The site, in a wooded area, is located on the Cooraclare road across from the site of what was previously the Kilrush Poor Law Union Workhouse. In the late twenties it was then utilised as a Mother And Babies home, which it is believed was closed in the early 1930s. Photograph by John Kelly.

A mother and baby home in Kilrush, where 180 children were born and 321 women admitted, between 1922 and 1926, is to be included as part of a nationwide commission of investigation.
This inquiry follows the revelations that almost 800 babies and children died at the Bon Secours home in Tuam, while high death rates at Seán Ross Abbey in Tipperary, Bessborough in Cork and Castlepollard in Westmeath have also come to light. Plots in the three latter homes are believed to hold the remains of 3,200 babies and infants.
The Kilrush mother and baby home was located on the site of Kilrush Workhouse on the Cooraclare road. The workhouse was built in 1841 and closed in the early 1920s. It was transformed into a mother and baby home in the early 1920s.
The workhouse and home were operated by the Sisters of Mercy, who had been involved in the workhouse since 1875, when they sent three sisters to live in the workhouse. The Fever Hospital, subsequently the District Hospital and now Kilrush Community Hospital, were located across the road.
A dolmen-like stone stands in a plot at the community hospital, where still-born babies or infants who died there were buried. Similarly, it is believed babies who died in the mother-and-child facility may have been buried there also.
It is not known exactly when the mother and baby home closed, although old newspaper reports suggest it was demolished in 1936.
In her book, Mother and Child: Maternity and Child Welfare in Ireland, 1920s-1960s, which was published in 2008, Dr Lindsey Earner Byrne wrote about the Kilrush mother and baby home: “It shared a common trait of high infant mortality rate, significantly higher than the mortality rate for legitimate which was one in five.”
Kilrush and District Historical Society PRO, Paddy Waldron has discovered that the mother and baby home in Kilrush was known as the County Nursery and was operated by the Sisters of Mercy.
“From April 1922 to September 1926, 321 women were admitted to the institution. One-hundred and 80 children were born and the total number remaining on September 30, 1926 was 145. I don’t think it’s safe to infer death rates from those numbers, or how many were admitted with children or while still pregnant. I haven’t found any other numbers apart from those,” Mr Waldron said.
Furthermore, Mr Waldron says it is impossible to say if a suspected burial plot, located in the grounds of Kilrush Community Hospital, contains bodies of babies who died in the County Nursery, which was located across the road. “Nobody can say with certainty but that’s what the people living across the road, back in the 1960s, believed. There are no details. I suspect if it was anything it was still-born babies because there was a maternity unit where the community hospital now stands. Still-born babies couldn’t be buried on consecrated grounds,” he said.
He has found that very few people in Kilrush have ever heard of the home. “It was a county-wide facility and I suspect it might have extended beyond the county. The building is gone for 78 years and the home may have closed some years before that. I’d say there’s just no memory of it,” he explained.
He said he is surprised that a book written on the Sisters of Mercy, Kilrush, in 1997, contained no reference to the home in the town. “The author had all of the records of the community to hand. I can’t see how they didn’t know it was there or didn’t find some evidence of it,” Mr Waldron noted.
On Wednesday, he discovered some extracts from local newspapers of the time, including the following from The Saturday Record of February 5, 1927, which focused on the County Nursery in Kilrush.
“As regards this institution, the estimated cost for the ensuing year is £3,000. An order was made that patients on admission were to be kept for a period of two years with their children. It was the opinion of the Medical Office that if they were fit to be discharged, they should be discharged. It’s not fair to the rate-payer that they should have to maintain these people, while their parents are relieved of all responsibility, which of course has led, in the past, to an increased number of inmates,” the February 1927 report read.
Kilrush, Tuam and Bessborough facilities were mentioned in a report in The Connacht Tribune of Octoer 10, 1927. Kilrush was described as having been “established for unmarried mothers and infants” and “is in a very poor condition of repair”.
Women referred to as “first offenders” had one baby, while “the degraded” was the term applied to women who had two or more babies. The report noted Kilrush is “the only one of this kind administered under the direct control of a board of health”, while similar institutions at Tuam and Bessborough (Cork) “are conducted on a capital grant basis”.