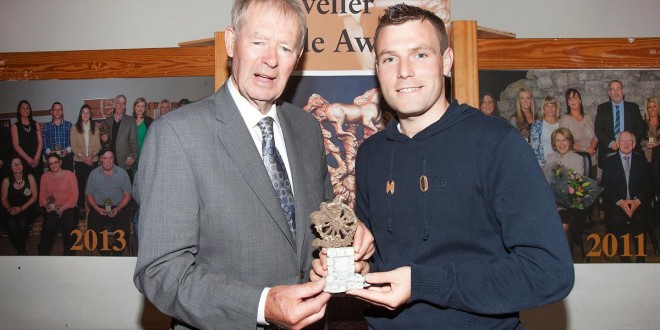 Famous musician and actor, David Essex honoured Travellers this Wednesday at the fifth Traveller Pride Awards, which recognise the achievements and contributions they make to their own community and to Irish society. The winner of the sport award went to David McCarthy of Ennis, who accepted it from broadcaster and “voice of Gaelic games” , Michael Ó Muircheartaigh at a ceremony in the Rotunda Hospital, Dublin. David, who plays for Avenue United, was a key member of this year’s Clare Oscar Traynor side.

David Essex brought an extra stir of excitement at the ceremony, not just because of his outstanding musical and acting status, which included selling millions of singles worldwide, but his additional status as being of Irish Traveller heritage.
Presenting the award to captain of the Clare senior soccer team David McCarthy, broadcaster and former RTE Gaelic games commentator Michael Ó Muircheartaigh said, “David McCarthy’s achievements as a soccer player, both locally in Clare and nationally, have won the respect of all who saw him perform. He worked hard for his successes and overcame the disappointments that came his way. Those sterling qualities allied to his interest in and love of education stamp him as an ideal role model for all young Travellers.”

David McCarthy said,  “Sport has been a huge part of my life and I am very grateful to all my family who have followed and supported me through good times and bad. It has taught me many different important life skills and has shaped my life in a positive way. To win the Traveller Pride Award for sport has given me a great boost and proves that hard work and dedication pays off. I have younger family members who are all doing well at an early age in sport so hopefully this trend of young Travellers in sport continues.”