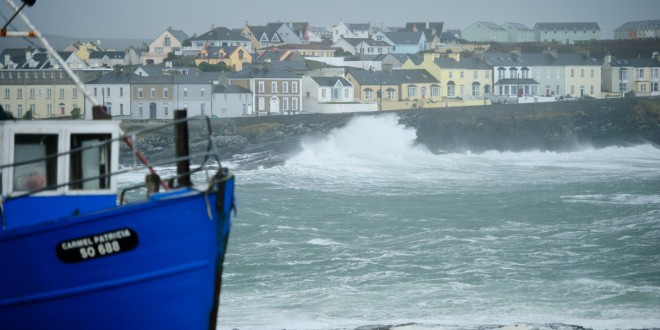 In the late 1950s, Kilkee was the third largest town in Clare but it is now the 16th largest. Ironically, the town is currently experiencing its busiest time of the year but on census night, 1,115 houses were unoccupied, which is 72% of the total housing numbers.

Loop Head Tourism chairman and Kilkee businessman Cillian Murphy said Clare County Council has not supported its own development plan, which had sought a population of 1,800 in Kilkee come 2017.

“I’m in shock. This is a result of 20 years of poor planning. There is lots of holiday accommodation but no commitment to the provision of permanent residential or social housing in Kilkee. It has exacerbated our reliance on our domestic tourism season. We’re seriously short of overnight service accommodation and from a planning point of view, we need to look at the reasons why we have seen a 50% drop from their population target. We’re almost at exactly half of the Clare County Council proposed population target for the 2011 to 2017 County Development Plan,” Mr Murphy said.

“The proposed target was 1,830 and we’re now at 914. We’re in a situation in Kilkee where there are no residential housing units being sold to people who want to live in the town on a permanent basis. It’s a holiday town and the value that has been put on properties can only be afforded by people who don’t live here. The community needs Clare County Council to come along and say ‘we need to work with ye and what can we do now that will reap a reward in the next five years?’

“It is seriously not good enough to put a figure on a County Development Plan and then walk away from that figure without putting in any work to try and get us there. From the point of view of Loop Head Tourism, we are trying to provide a longer season in the area but we need assistance from the council,” he stated, warning that broadband providers may not be willing to invest in Kilkee.

“Where does this put us as a community from the point of view of the provision of broadband, for example? The case will probably be made by commercial entities that it is not worth running a cable here because we have a population of less than 1,000 year round. For me, it’s a wake-up call. We need to sit down and have a discussion with the council and ask where is the plan to help people who want to move back into the area to be in a position to afford it,” Mr Murphy maintained.

Helen Quinn, senior executive planner, Clare County Council, stated, “Clare County Council is aware of the extent of population decline in Kilkee town since 2006, notwithstanding the changes to the CSO settlement boundary mapping of the town between the 2006 and 2011 census. It is expected that following on from the 2016 Census, the CSO will publish Small Area Statistics by June of 2017 and this information will give greater detail as to where the decline is occurring within the town,”

“Clare County Council has been actively involved with the community in Kilkee in putting together a strategy for the economic development and overall town improvement, Towards a Better Kilkee, and it continues to work with the community in delivering local enhancement projects around the town. The council is acutely aware of the importance of tourism to Kilkee and it has actively promoted tourism products in the wider West Clare area, which it is hoped will have a beneficial spin-off for Kilkee and the other towns and villages of West Clare on a year-round basis to counteract the current seasonal nature of tourism in the town. Clare County Council continues to invest in social and cultural facilities, such as the Sweeney Memorial Public Library, Cultúrlann Sweeney offering recreational amenities and services to the local residents and visitors, making the town of Kilkee an attractive location for people to live, work and visit into the future,” Ms Quinn added.

Meanwhile, speaking to The Clare Champion this week, community activist and retired pharmacist John Williams said the only way to stem the population decrease is to somehow bring sustainable, year-round employment to the resort town and West Clare in general.

“Employment is a very big issue. There are no jobs for young people and they just pull out. The population fall is not far off half in 10 years and it will fall more come the next census. A lot of people living in Kilkee now are elderly. Any offspring they have are elsewhere. I can see another big drop coming by the next census,” he predicted.

The absence of reliable broadband continues to be a significant job creation impediment.

“Employment creation is the secret to get new people coming into the place. How the employment is created is a separate issue. In Skibbereen they have created 150 IT jobs in an old factory. If they can do it in West Cork, they can do it in West Clare. But that means the provision of proper broadband, which we don’t have and we are unlikely to get it for two years. It also needs a commitment from the local authority and all of the stakeholders if something is to be done properly,” Mr Williams added.

While he pointed to the success of the tourism sector in the peninsula, particularly since the Wild Atlantic Way marketing initiative, Mr Williams said the sector does not create permanent, year-long jobs.

“The problem with tourism is that it’s not sustainable. There are four or five busy months but there is nothing happening in a major way for the rest of the year. It’s a problem all over the place and there is no quick-fix solution,” he said.

Recently, the Minister for Arts, Heritage, Regional, Rural and Gaeltacht Affairs Heather Humphreys launched a Town and Village Renewal Scheme for Rural Ireland. A total of €10 million will be made available to local authorities in 2016 to support the revitalisation of rural towns and villages.

“Rural development is a key priority in the programme for a partnership government. Ireland’s towns and villages are the heart of our rural communities but the economic downturn had a significant impact on many of these towns and villages. It is incumbent on us to help them achieve a recovery. I am launching the Town and Village Renewal Scheme to begin breathing life back into our rural towns and villages,” Minister Humphreys said.

“It will be administered through the local authorities, who will be required to partner with local businesses and local communities to develop and implement ideas that can make a real and lasting impact in revitalising rural towns and villages. The scheme also addresses one of the recommendations in the CEDRA report, which was published in 2014.

Previous Ennis claims a share of Olympic rowers
Next Kilmaley, Newmarket and Inagh-Kilnamona bow out