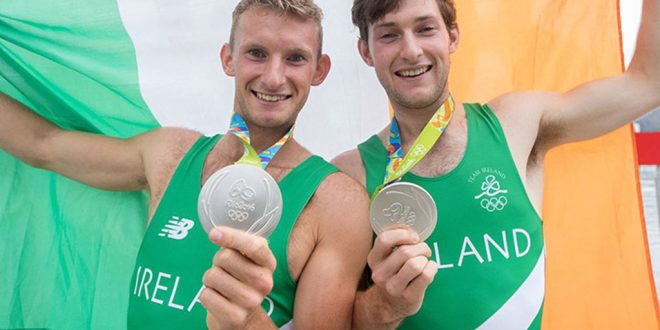 Paul and Gary O'Donovan with their Olympic silver medals for rowing.

OLYMPIC rowers Paul and Gary O’Donovan, who won the hearts of the world after their historic silver medal win in Rio, have been described as “pure messers” by their Clare uncle.

However Mike Doab, the brother of their mother Trisha, insists that despite the post race banter, the boys are very serious when it comes to their sport.

Both Paul and Gary, from Skibereen, made headlines all over the world with their hilarious post-race interviews, including describing their tactics with the now immortal words of “close the eyes and pull like a dog”. The pair are the grandsons of John Doab from Connolly Villas with their uncle Mike well-known locally, having run a butchers in Clarecastle.

Mike said the family are thrilled with Paul and Gary’s medal-winning ways. “They did a fabulous job, we’re all very proud of them and I can’t wait to see them.”

He added, “They are pure messers, they always were. But, honest to God, for them there is nothing that can’t be done, they will always try.”

While he was unfortunately unable to travel to Rio to cheer on his nephews in person, Mike watched them take home Ireland’s first-ever Olympic rowing medal at his mother’s home in Cork.

“The place was filled with family, relations, neighbours. Half the parish was there,” he said.

Unsurprisingly when the O’Donovans took the silver medal, the place erupted with cheers.

Despite their strong connection to the Banner County, Paul and Gary have yet to visit their grandfather’s home place of Ennis, with Mike noting that they have a hectic training schedule.

“They just haven’t the time. They are constantly training, they don’t go anywhere unless it is for training camp or competitions. They take the training very serious, it is seven-days-a-week,” he said.

The family are now awaiting word on when Paul and Gary will return to Cork for a homecoming celebration. Paul is set to compete in Rotterdam for a world championship event next week but whenever they head home to Skibbereen, Mike will be one of the first in line to congratulate his famous nephews.

“I’ll definitely be there to see them, we don’t know when they’ll be home but I can’t wait to see them. There will be great celebrations in Skibbereen.”