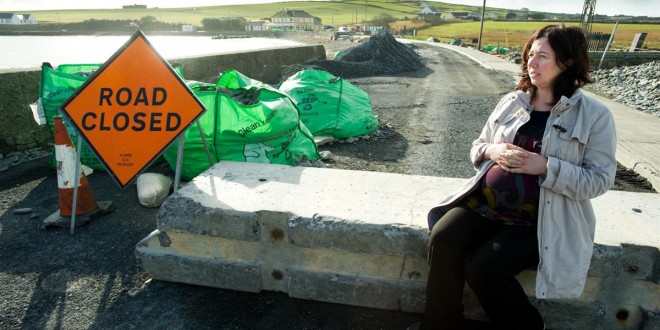 Yvonne McNamara, who is expecting a baby at the end of the month, is concerned over Clare County Council's decision to close an 80m stretch of road in the village. Photograph by John Kelly.

KILBAHA woman Yvonne McNamara has been keeping a relentless eye on recent weather forecasts as the orange alerts mount up. She has particular reason to. Yvonne and her husband, Fergal are due their third child come the end of February.

However, before they drive 70 miles to Limerick they first have to negotiate the leaving of Kilbaha. An 80 metre stretch of the main road in the village remains closed, although Clare County Council is due to start remedial work on Monday. On top of that the McNamaras live in Fodra, which is west of Kilbaha. The beach there regularly spits stones onto the access road, sometimes making it impassable.

“It’s Peig Sayers time really,” Yvonne laughed. “You’d think you wouldn’t have to be thinking of that as well as the difficulty of being so far from Limerick. You’re going 70 miles from here as it is. It’s an added headache you don’t really need,” she said, as the wind whipped up in Kilbaha on Monday.

Just last weekend, residents in Fodra were cut off for a time when their road flooded. Yvonne is considering a back up plan in the event of the inclement weather not abating before the end of the month.

“I might leave a car at both sides, at the house and in the village. We’d have to get down to the village somehow and then get across the village,” Yvonne explained.

“It’s a little bit of a worry. They say that a full moon and spring tides can affect the waters. Hopefully they won’t coincide with the labour and birth. Hopefully I’ll go before hand but you never know,” she added.

2014 has been marked by two major storms in addition to high tides.

“When Storm Christina came in we had flooding in Fodra. Beach stones were thrown up to the side of the road although the road was clear and we just had to wait for the water to recede. Kilbaha was decimated at the time and it’s still bad. Depending on the tides, we had to wait for Fodra to clear before we could get out. But we could get out then and it wasn’t so bad,” Yvonne said.

“As regards the second storm, the stones came out from Fodra beach and were pushed back further, which never happened before. My fear now is for the next storm is that they will be pushed back further and it might take days to clear them,” she suggested.

Yvonne is trying not to dwell too much on what the weather might bring with it later this month but acknowledges that she is somewhat concerned.

“It is a worry not having access or an exit,” she said.