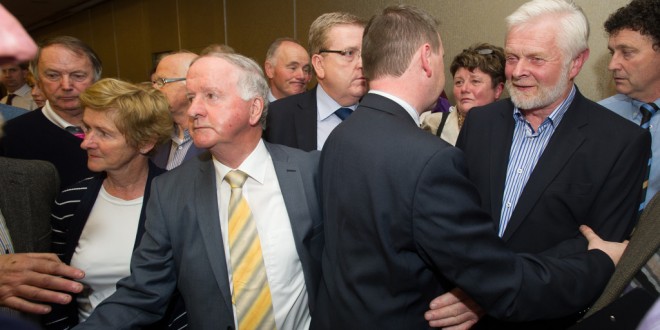 Fine Gael's victorious candidate Gabriel Keating, left is congratulated by supporters as fellow candidate Oliver Garry, who was unsuccessful is offered consolation by TDs Pat Breen and Joe Carey and during the election count at The West county Hotel, Ennis. Photograph by John Kelly.

ELECTED for another five years late this evening, Fine Gael’s Gabriel Keating said his vote climbed during the day like a jumbo jet.

He said he was always confident. “I had the work done and I felt it would come right. My vote this morning was low, it was two or three hundred behind some of the lads that I thought would get there, but it climbed and climbed and climbed.”

It was a very different campaign to 2009, he claimed. “It was a different campaign because five years ago I was really taking the seat that had been held by Madeline Taylor Quinn. This time we had two candidates, an ex Fine Gael and a Fine Gael candidate from Kilrush. But I had great support, great canvassers with me.

Owen Ryan has been a journalist with the Clare Champion since 2007, having previously worked for a number of other regional titles in Limerick, Galway and Cork.
Previous Kelly makes it eight in a row
Next Pride on the line in joint fundraiser