Home » Sports » Kaiser family give their last drop for Newmarket 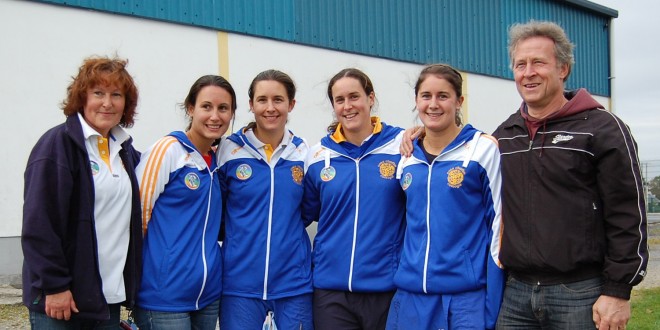 The Kaiser sisters, Carol, Ruth, Iris and Niki, with their parents, Marie Louise and Martin.

Kaiser family give their last drop for Newmarket

UNTIL 2015, Carol Kaiser had not put much thought into how effective a shouter she was. An accountant based in Dublin, Carol is wearing the number one jersey for Newmarket this year and is still acclimatising to the demands of what is often a solitary role. Goalkeeping isn’t merely about preventing the sliotar from crossing the white line and taking puck-outs. Communication is a crucial component and this basically boils down to shouting quite a lot.
“It wouldn’t have been something I’d have been very good at previously but I am trying to improve on shouting,” Carol revealed. The problem is that her full-back is a more experienced practitioner and can be heard miles away.
“I have Laura [McMahon] in front of me and Laura does a lot of that work for me. She’s very good at shouting. When I shout, I think I’m really loud and then nobody hears me,” Carol noted somewhat sadly.
The sisters have won 22 senior camogie championship medals between them. Ruth plays midfield, while Iris and Niki both play in the forwards.
Iris only returned home this June following three and a half years working as a vet in New Zealand. Despite her geographical station, Iris was not tempted to take up rugby.
“No. I don’t like the idea of getting bashed,” she laughed. Yet when people first see hurling or camogie, they think it’s a deadly dangerous game.
“You don’t get tackled in hurling. It looks a lot worse than it is because you wave sticks around,” she smiled.
Iris feels there is more pressure on Newmarket to win this weekend than there was in the Clare county final.
“There’s a bit of pressure going on. At the start, it was all about the county but now that we’re playing the senior Munster club final, I think there’s more pressure to win the Munster club. You’re more used to playing Clare teams,” she explained.
All four of the girls were born in Switzerland. They moved in 1995, when Martin Kaiser was appointed as Shannon Aerospace CEO.
“I was initially working with Swiss Air in Zurich and I was asked would I be interested in coming over? That’s what brought us over to Shannon and we got the house here in Newmarket. We started to look around at what our girls could do in their spare time. That time, GAA was really the only thing to do here and having the field so close to where we live was very convenient,” Martin said.
The Kaisers were starting from zero when it came to knowledge of hurling. They had never even heard of the sport.
“We didn’t know what hurling was. I came here in the summer of ’95 and I had no idea what hurling was. There was chaos everywhere and I was wondering why. But then quite quickly we got used to it and the girls started to like it. In a place like Newmarket, everybody was around GAA. Once you were there, you saw everybody and it probably helped to make it easier for us to get established in the village.”
Carol insists that the four sisters get along well on and off the field. “It’s pretty much the same. We wouldn’t be massive fighters,” she maintained.
“So lovely,” Aimee McInerney chirped at that point. The injured Newmarket wing-back had been sitting in silence up to that moment, listening to what the Kaisers had to say for themselves.
“You just kind of see them as one of the other girls on the team, to be honest. You’re not saying, ‘I’m going to pass to my sister and not to everyone else’,” Carol noted.
Ruth Kaiser is currently based in Marseilles but travels home for most championship matches.
“She’s in NUI Galway doing commerce with French,” Martin said. “Third year there is abroad. She left in September and will be back next June. She came back for the county final and is coming for the Munster final.”
As for his career, Martin is now in “semi-retirement” and is self employed.
“I left Aerospace five years ago. I was in charge until 2010. Then I was running the other Lufthansa plant in Shannon for three years. Two years ago, I left there and started my own small business in energy consulting.”
His goalkeeping daughter, Carol, is still learning the tricks of her new trade. She likes to have an early word with the umpires in the hope that they might back her in the event of a 50/50 call.
“I would usually say hello to them and hope that they’d take to me. Umpires are very different. Some of them are very nice to you and some of them keep talking to you for the whole game,” she has found. Whatever helps Newmarket over the line on Saturday, the Kaiser girls are willing to try it, backed by their parents, now Newmarket to the core.

NOVEMBER in Newmarket and the rain teems forcibly from the dark skies. Clare camogie board fixtures secretary Marie Louise Kaiser doesn’t seem to notice, although her sizeable umbrella is a help. Between bouts of talking to The Clare Champion, she relieves all comers of €5 as they seek admittance to the U-13 shield final that was held in Newmarket on Saturday.
In the adjoining field, the Newmarket senior camogie team hone their plans for this weekend’s Munster final. It’s the 11th month but the fields are so congested, it could be mid-July.
Come Saturday, Marie Louise will fulfil her first aid role, while hoping that Newmarket, who will field all four of her daughters, can win the Munster senior club title for the first time in their history.
“Yes and I prefer doing things like that,” she replied, when asked does she enjoy the perhaps mundane but vital jobs such as collecting gate money. These jobs have to be done as well and if you do them right, the whole thing runs better. I don’t like to be in the limelight. There are a lot out there who do these jobs and nobody talks about them. In the camogie association, we are very grateful to all those people,” the former board secretary explained.
Marie Louise accepts that life for her family would have been markedly different in Newmarket had they not become so immersed in club and county camogie.
“It probably would. From the beginning, we have been involved with Newmarket camogie and ladies football and in the county. It’s our life,” she reflected.
When the family moved to Ireland in 1995, Ruth was nine-years-old. Camogie, according to her mother, helped her to assimilate.
“With camogie, she had it easy. When she went to school, Veronica McMahon was coaching in the schools. She just brought Ruth in and integrated her. In the first year, she could hardly speak English but she played camogie. We were told at the beginning that you had to be born with a hurley. I think our girls have proven that is not true. Newmarket was very open to people. We never had a problem. We were never treated as foreigners,” Marie Louise observed.
She recalls a seminal moment when the eldest of the Kaiser sisters spilled blood for the cause.
“In an U-12 final, Ruth got hit and she had a big cut on her chin. I patched it up and sent her back onto the field. From then on they thought, ‘ok, she’s useful. She’s tough.’”
Marie Louise does her best to retain her composure during matches.
“I’m actually very quiet but I probably have to hold myself back a bit when they get injured. I’m doing the physio, so I can do something. You can’t really see the play that much but, all in all, I manage to see enough,” she smiled.
As we speak, Clare camogie county board PRO Bríd McNamara steams purposefully around the corner and lends an ear. Hearing what is being spoken about, she pays an effusive tribute to the Kaiser family.
“The Kaisers are a unique family in that Marie Louise is on the county executive as is Martin, who is county registrar. All four of the girls have played for Clare.
“I don’t think there’s another family in Ireland that could say they have such an involvement both in the club and in their county,” she stated.
If Newmarket become the first Clare camogie club to win the Munster senior club camogie title, the Kaiser family will have played a central role in helping them do so. The quartet of sisters will do their best to make sure that happens on the field while off it, Marie Louise and Martin will celebrate as much as their daughters if they help their club to the Munster summit come Saturday evening.