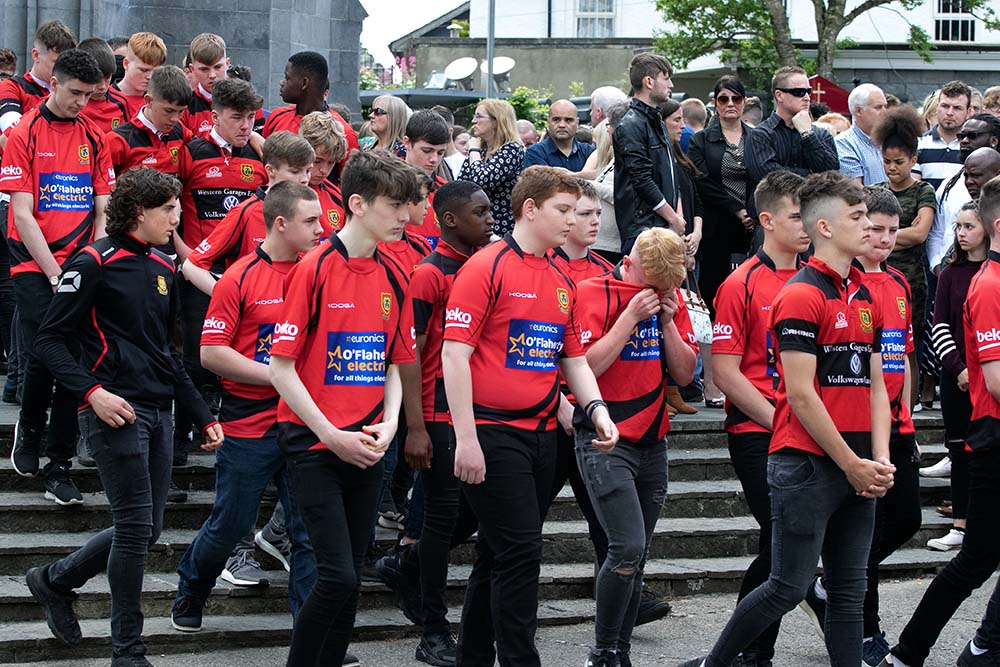 “I wish it was a bad dream”, the devastated father of Jack Kenneally told mourners at Ennis Cathedral as the teenager was laid to rest on Sunday.

Hundreds of mourners packed the church to say their last goodbyes and to pay tribute to the talented rugby player who along with his friend Shay Moloney tragically lost their lives in a swimming accident at Knockanean on Thursday.

Jack’s father Sean, surrounded by his daughters for support, emotionally spoke about the “sense of shock and disbelief” that the family have felt while trying to come to terms with the tragedy.

“I wish it was a bad dream, clearly it is not,” he said. He acknowledged the “overwhelming outpouring” of support and sympathy that the family have He described his son as “our rugby star, our little fella” who “achieved so much”. “I was really proud to call myself Jack’s dad.”

He paid tribute to Jack’s friend Shay who heroically tried to save Jack on that awful day in Knockean. Looking up he said, “It fills me with sorrow to know that you lost his life trying to save Jack but that doesn’t surprise me. I will forever be indebted to you.”

He thanked everybody who has supported the family in recent days, and all emergency services and rescue workers who helped in the search for the boys.

Sean continued, “Jack, it’s not goodbye. I’ll see you later. There is an empty seat at our table, an empty room at our house. But there will never be an empty place in our hearts for you.”

Ennis Rugby Club coach Padraig Brennan recalled how the first time he saw Jack was on a video climbing the ceiling of St Flannan’s. “He was the business”,” he said. “He had strength, speed, valour, everything you could want in a rugby player. I was so proud to coach him.” He concluded, “He was going all the way.”

Fr Tom Hogan spoke of the “unbelievable sadness” that has descended on the families of both boys and the community. ”

Jack was the youngest in the family with older sisters who “doted on him”. “He was born into a family where love is in the air, and love it never dies, it endures.”

Speaking to the family he said, “Jack who brought such joy and fun and vitality and humour and noise and craic, a whole mixture into your lives. He will be forever young, forever in your lives.”

Following the funeral mass Jack was laid to rest at Drumcliff cemetery. He is survived by his parents Sean and Tina, sisters Danielle, Katie and Aisling.

West Clare native Peter O'Connell has worked for The Clare Champion for 12 years and covers everything from sport, especially GAA, news, features and has been even known to branch into the fashion scene on occasion.
@@westclarepage
Previous Footballers outclassed in Killarney
Next Shay remembered as “forever young, forever our warrior”