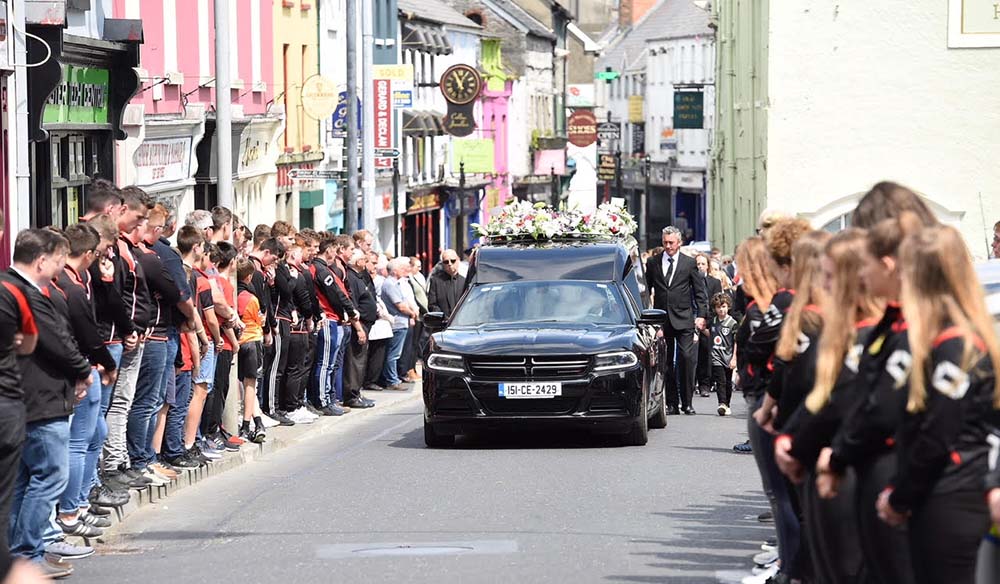 Rugby players form a guard of honour as the remains of a Shay Moloney leave the cathedral in Ennis following his funeral mass. Photograph by John Kelly.

ENNIS teenager Shay Moloney will be remembered by his family as “forever young, forever our warrior, forever our hero”, his funeral mass was told. The 15 year old was laid to rest on Monday after tragically losing his life in a swimming accident along with is friend Jack Kenneally, who he had desperately tried to save.
Ennis Cathedral was packed to capacity as mourners, including friends from St Flannan’s College and Ennis Rugby Club, gathered to say their final goodbyes at the emotional ceremony.
His uncle Louis Moloney, speaking on behalf of the family, told those gathered, “What can you say about a young man who only had 15 years of his life. The answer is a lot, too much to mention here. Shay crammed more into his 15 years than most do in a lifetime.”
He described his nephew as “a character in every sense of the word, with a bubbly personality and a cheeky grin for everybody. There was more than a hint of devilment in that grin, and with two blue eyes that could light up the world.”
He said that Shay was “loved by all who met him” no matter what age or their circumstances. “We were so proud of Shay and the person he had become. He had recently sprouted into a young man with all the qualities to take on the world, good looks, personality and a winning attitude. The world was at his feet and with the great family support Shay had, he was definitely going to excel.”
Speaking about Shay’s love of sport, he said that the family have received messages of support from professional rugby players with tributes paid by the IRFU and Ireland teams. “Shay would have been in his element, the centre of attention.”
He thanked “everybody who has supported us in these dark days” including the emergency services. He continued, “the support from the town of Ennis was immense.”
He recalled some of the fun Shay would get up to, including doing impressions of his grandfather, before announcing, ‘sure I’ll sleep here’. Louis concluded, “Sleep the long sleep now Shay…forever
young, forever our warrior, forever our hero.”
During the funeral mass Fr Ger Fitzgerald told the family, “Our hearts are torn with yours.” Addressing his friends, he said, “You were his whole life, you were everything to him. And in these hard times can I invite you to know and remember that it’s ok not to feel ok. But can I encourage you to hold your head high, like he would, to look after one another, like he would, to mind one another, like he would, and help one another, like he would. Have the heart of a warrior, like he had,
not only in rugby, but also in life.”
Following the funeral mass there was a guard of honour by the Ennis Rugby Club with fellow classmates from St Flannan’s also gathered. He was brought to Drumcliff cemetery for burial.
Shay Moloney is survived by his loving mother Fiona, stepfather Gavin, Fran and Sarah Jane, grandparents Paddy and Ita, uncles, aunts, cousins, extended family and many friends.

West Clare native Peter O'Connell has worked for The Clare Champion for 12 years and covers everything from sport, especially GAA, news, features and has been even known to branch into the fashion scene on occasion.
@@westclarepage
Previous “Jack, it’s not goodbye. I’ll see you later” says devastated father
Next Gardaí confirm fatality following M18 collision