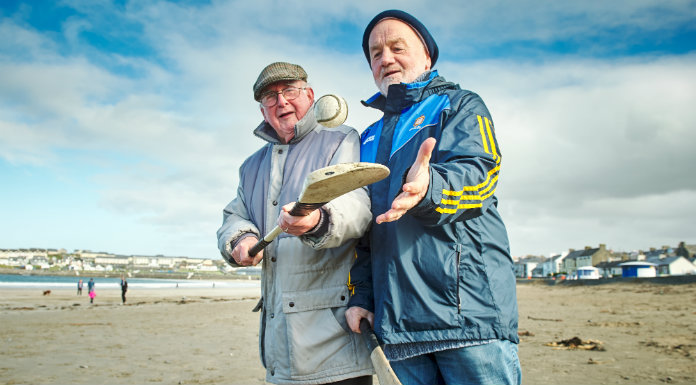 Hurling Awake In The West

There is a revolution underway in Kilkee under the watchful eye of Jim Fitzpatrick’s mural of the most famous revolutionary of all.

Anyone who was out for a Sunday morning stroll last weekend along the strand under the watchful eye of Che Guevara would have been met with the sight of men and women, young and old, parading with hurleys and helmets as Kilkee/Bealaha Hurling and Camogie club were in full flight.

The move to develop adult hurling is still in its infancy, but it is fair to say that those who are overseeing it have long since moved beyond that stage. There have been many instances of hurling on the strand in Kilkee down through the years, and stalwarts like Michael O’Neill and Paddy McDonnell can recall many of them.

Paddy has been in love with hurling for as long as he can remember, and early on Sunday morning he made the short walk from his house on the Strand Line to the bandstand on the prom to watch the action unfold. He was only just home from Pairc ui Rinn the night before, but the prospect of watching even more hurling was one that made getting out of his bed that bit easier.

“I’m really delighted to see it. The hurling started a few years ago and the camogie is really starting to take root now. There’s an effort going on now to bring junior hurling back to the town. Off and on down through the years, there’s been plenty hurling going on. Kilkee/Bealaha first came into being in 1983, and was very strong through the 1980’s. We finished up at the end of that decade with 94 registered members, and teams from u-11 up to adult, apart from u-21, and won at all grades in the west Clare competitions. They won the Junior C league and championship in their first year and that was a powerful start. The first juvenile team was in 1986 and they won a special competition in Cusack Park. It faded a bit then around the mid 90’s but reformed again in 1998 and won a few west Clare championships. There was an attempt to get the junior team going again a few years ago but that only lasted 12 months or so” he noted.

Michael O’Neill is a stalwart of the na Piarsigh club in Limerick, and his son Shane has played and managed the Ennis road side to glory in the past, while also lining out for Limerick. Paddy credits O’Neill with instigating the most recent resurgence of the game in west Clare.

“Mick O’Neill came to live around here, down in Querrin, and he’s been a real dynamo. He put a group of people around him and they are very keen. They started coaching the players as young as six years old on the astro-turf and they’ve had up to 40 players involved. Some of them are really starting from scratch, but the numbers are there and more importantly the enthusiasm is there. If the present rate of enthusiasm is maintained, then it will last. You’ll be a long way from winning any major championships or anything like that, but there is a market for hurling around here. To get people embedded into it, it can be difficult when you’re in a football area. You need people to promote and have the drive to make a real go of it, all it takes is the effort” he said.

Donegal Tina Roche native is responsible for the growth of camogie at both underage and adult level in Kilkee in recent times, and she admits the demand for the game has been something that she didn’t foresee when the idea was first mentioned.

“We started off with a junior club for hurling only for boys and girls because the girls can play up until u-12. There was such a fantastic interest that it would have been wrong for us to just leave it at that level, so last year we decided to branch into camogie for the girls to go out on their own. We joined blitzes and took part in Hurl With Me, which is a camogie initiative where it encourages parents of children who are u-10 to participate in the game too. We went to an All-Ireland blitz in Abbotstown and the development officer asked would we be interested in setting up a camogie club for adult level. Our first meeting had seven eager ladies who were willing to get involved, and at our first training session we had about 20. Since then, we have grown that to nearly 40 players, so we will be entering into the league which starts at the end of March and also the championship then”.

Tina admits she made the move to west Clare for love, as her husband is originally from Doonaha. They spent 11 years in Dublin before making the move west. The couple have two young girls, and Tina says having an outlet for them was one of the main reasons she got involved in the club.

“I didn’t play camogie growing up but it’s great to have the option of giving my children another alternative and another activity in west Clare, and that’s what you are limited to. You either do it yourself or else you have to travel to elsewhere. It started off with a taster in the community centre in Kilkee which Peter Casey and Mick O’Neill arranged, and there was great interest in that so we decided from that to start the club and it has really grown since then. It’s great to have all levels involved because children can see then once they start, that there is something there for them as they progress up along. If they enjoy the sport, hopefully they will stay involved long-term. We are also getting huge parental support and we have roped a lot of them in as coaches so it all builds it up” she noted.