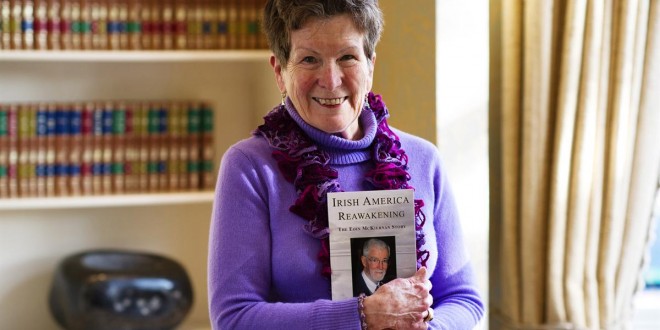 CATHAL Goan, former head of RTE, will launch Irish America Reawakening: The Eoin McKiernan Story a book at Foras na Gaeilge in Dublin on Wednesday next. Eoin McKiernan was the son of Clare emigrant Delia Nagle from Lahinch, and founded the Irish American Cultural institute (IACI), which poured millions of dollars into the Irish economy over the latter part of the 20th century.

Eoin’s mother was from Tullygarvin in Lahinch but he was born in New York City, and studied at the Irish Cumman na Gaeilge in New York and won a scholarship to study at Rosmuc. Eoin was a fluent Irish speaker and worked passionately for the language revival. He was on the faculty at the State University of New York and the president of what would become the University of Saint Thomas in Saint Paul.

Having studied in Rosmuc, alongside Eamon DeValera’s children, he earned a gold Fáinne in his late teens and was consumed with Ireland from there forward.

“From 1938 onwards he had bugged the Irish Government to form some kind of a cultural outlet in the United States similar to the ones that the British but he wasn’t successful. Fast forward 25 years, in the meantime the Irish Government had done nothing and when in Minnesota where he had recently arrived to teach, Eoin was asked to give some programmes on public television about Ireland. They were so incredibly successful and the television station said they had never had such an incredible response. Eoin realized that there was a market for the cultural outlet that he wanted the government to provide and that he had the opportunity to do it himself. He, his wife and a philanthropist by the name of Patrick Butler incorporated the institute. He started publishing a scholarly journal entitled Eire Ireland, which is still in existence, although it is now twice a year. He did it four times a year and a newsletter called Ducas, which is also still in existence but now in a e-letter form. Then he started bringing people to Ireland, to teach them the real Ireland instead of the Shamrogery that passes for the real Ireland. He started those tours in 1966 and I picked them up for him in 1995, they only stopped a couple of years ago when my husband got sick,” Deirdre outlined.

The Institute established a number of awards including literary awards and art awards, both of which have connections with local universities. Among the early recipients were Brian Friel and Eavan Boland. He also branched into music.

“He commissioned the first Irish translation of the Catholic bible. Princess Grace was the honorary international chairperson of the institute. They concocted a scheme to bring teenagers to Ireland as part of a six week programme, and now it is maybe three or four weeks. As part of this they study a bit of Irish and culture. Initially they stayed with families but that fell apart a few years ago. He wanted them to experience what he experienced staying with his grandmother in Clare and to be immersed in the Irish culture,” Deirdre outlined.

Prior to his death in 2004, Eoin’s son Fergus sought about buying a house in County Clare and he settled on building a cottage in Scariff, however tragically, Eoin did not get the opportunity to come and see the completed cottage.

Fergus spends part of the year in Scariff, and has endowed a scholarship for Irish study in the Gaeltacht in Eoin’s name at the Scariff Community College.

Speaking about the book, Deirdre said it was something she always thought about doing.

“He did so much for this country. There is a quote in the book from former ambassador Sean Donnellan who said, ‘the umbilical cord between our two countries had nearly been severed until Eoin came along, and his was the only voice on the international scene in a cultural sense, and he rebuilt the umbilical cord and it was as a result of his work that the economic and political events of the 1990s were able to happen’. That’s why I felt the story had to be told. He never tooted his own horn. I wanted people to know what he had done and I wanted American’s to know the real Ireland in a way that they still don’t,” she added.

Deirdre herself was born in New York City and was educated in Ireland and western New York. She is the eldest of Eoin McKiernan’s nine children. From her father, she inherited a passion for Ireland and all things Irish. In 1995, Deirdre took over from her father the McKiernan Tours to Ireland. She has served as the chair of the Rochester Chapter of the Irish American Cultural Institute (IACI), founded in 1962 by her father and currently, she sits on the national board.

She currently lives with her husband, Joseph Hetzler in Fairport, New York state.

Eoin still has relatives living in County Clare particularly in the Miltown Malbay area, but also in Ennis, and Lahinch.

Previous The late Bernie Wrafter, Roslevan, Ennis
Next Clare pick up points at home to Wicklow