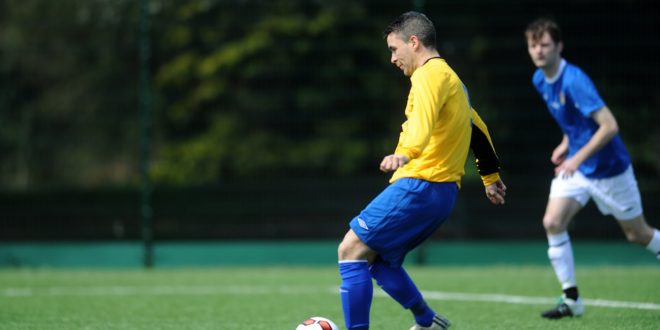 An Eoin Hayes strike in the third minute of the second half helped Clare to soccer history at Maginn park in Buncrana this afternoon.

In winning, Clare retained this inter league title for the first time in their history on a day when Hayes’ fellow Irish international Stephen Kelly was named as the team manager. Kelly was outstanding in a magnificent defence which dominated, particularly in the final ten minutes when they were under huge pressure as the home side piled on pressure in search of an equaliser

The second half was particularly entertaining with chances at both ends. Three minutes after the resumption Dave McCarthy created the opening and Eoin Hayes, as he has done so often in recent seasons, applied the finish, shooting low to the corner.

The early exchanges were evenly contested but as the half wore on Clare began to dominate and Eoin Hayes caused problems for the home side’s defence and won a number of frees on the edge of the area. That said, it was the Clare goalie Barry Ryan who was called on to make the only save of the half when he went full stretch to save from Terence Doherty after Stephen Kelly’s attempted clearance had been intercepted on the half hour mark.

That break apart, the Clare defence dominated and it was the home sides back four who were kept busiest as Hayes, in particular, caused them problems