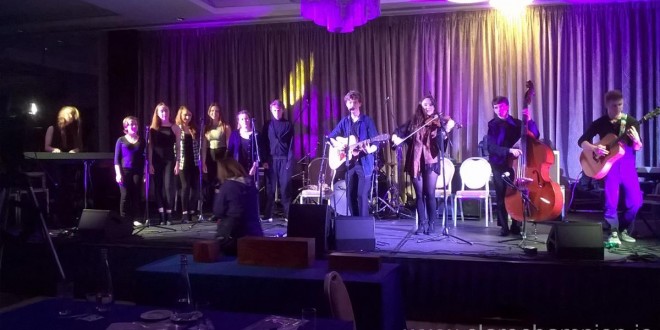 Barra MacMahon and Na Tonnta on stage at Comortas Beo in Killarney with their specially composed song Bí Imithe.

A group of Gort students made waves in Kerry last week where they won a top Irish language music prize. Eight songs were selected for the final of the Comórtas Beo song-writing competition for young people held in Killarney on Thursday last. Sixteen year old Barra MacMahon from Kinvara composed the song and with classmates from his music class in Gort Community School performed it on stage in the final which coincided with Oireachtas na Gaeilge. The group’s song Bí Imithe proved a hit with judges winning the overall prize of €3,000.

“My music teacher Yvonne Conroy told us about the competition. She had received an email about it. That was back in September,” Barra recalled.

To enter people between 11 and 18 had to compose a song in Irish lasting less than five minutes, be prepared to perform it live at the finals, supply a video including the song and details of the writing process as well as recording any event organised to launch it. A member of the group was also expected to give a presentation on the son at the final.

“It was a bit daunting at first but I like writing music in general and writing in Irish was just the next step. I am interested in Irish and I like languages. I put it together myself and there were a few grammatical errors and my teacher Yvonne Conroy helped me with that. Then we had to make a video of it. First we had to make one of the song then we had to discard the song and do another video about how it was composed. There were about 11 of us in total, involved in it between playing different instruments and doing the harmonies and so on,” Barra explained.

“About a week after I submitted it the results came out about who got into the final and we were one of them. So we all got a bus, the school organised it for us, to Killarney on Thursday evening for the final,” he went on.
“We performed around 8pm and there was the whole concert, then a céilí and then they announced the results. We were the only group there that were not from a Gaelscoil, and part of the marking scheme was the presentation in Irish so I was surprised we won,” he concluded.

Based on affairs of the heart and heartbreak the song is sung by Barra who also plays guitar with fellow musicians Rasmus Báicéir, Blaithnaid de Búrca, Eoin Mac Suibhne, Fionnuala Ní Fhathaigh and Cathal Ó Fionnagáin as well as five other singers making up Na Tonnta. The video of Bí Imithe is available to watch on YouTube.