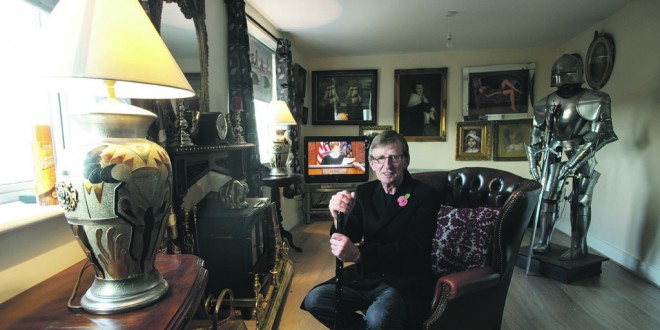 The one and two-bedroomed apartments are owned and managed by Clúid Housing, one of the State’s largest housing associations.

The apartments were originally built as a private development and, following consultation with Clare County Council, Clúid purchased the units for €970,000 in April this year, under the Capital Advance Leasing Facility (CALF) scheme and invested a further €130,000 in refurbishing the complex.

The first tenants, including returned emigrant Jim Houlihan, took up residence in September 2014.

A Heavy Goods Vehicle (HGV) driver, Jim Houlihan arrived back from London to his native Kilrush seven years ago, just as the Celtic Tiger era came to an abrupt end.

“I was living and working in London for 30 years as a HGV driver and then as a bus driver for a year and I decided to come back to live and work in Ennis. But the recession started in 2008. I was told to hold on and hold on. One year went into the next year and it’s only now that things are beginning to lift up a little bit,” Mr Houlihan said.

He had been living in Kilrush but was finding it difficult to make ends meet and, when the opportunity came up to move into his new apartment in Pound Lane, he was delighted.

“If you are on the council waiting list, they will recommend you if they think you’re suitable. That’s the way it works. There are some couples in the apartments and everyone is about middle age, with most single or separated,” he explained.

“There’s more to do in Ennis and the apartments are absolutely A1. Clúid have taken 22 people off the waiting list in one strike. Everybody is very happy with the apartments and, this Thursday, we’re having a little get-together,” a delighted Mr Houlihan said.

“Clúid is the first housing association that has bought a property down in Ennis and, if this is a success, they say there’s no reason not to buy another property,” he added.
Now that Jim Houlihan is settled in his new apartment, he is hoping for another bit of luck, as the economy picks up again.

“I was lucky to get all my licences in London and I’m hoping a job will come along soon. All my licences are up to date and a lot of the companies that have interviewed me have my number. It costs €4,000 or €5,000 to pass the tests and a lot of people who passed them have had to move abroad to work so there should be a shortage of HGV drivers, when things pick up,” he said.