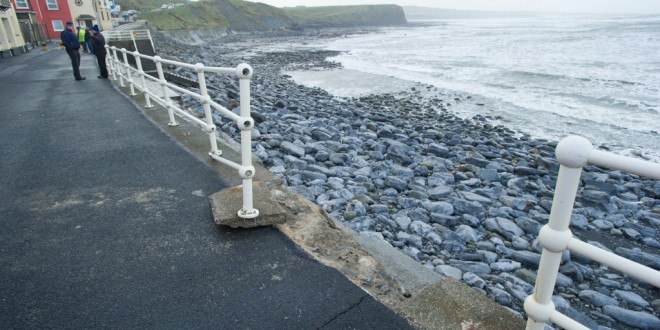 Business and community leaders in Lahinch breathed a collective sigh of relief this week, following the green light for €2.85m of major coastal protection works for the promenade area of Lahinch seafront.

The long wait for the start of this work, which will be fully funded through the OPW and will be undertaken under the auspices of Clare County Council, is now over.

It includes the addition of extensive rock armour storm defence to the existing structure, a new concrete apron in front of the current seawall, refurbishment of existing steps and ramped access to the beach, along with development of a new universally accessible ramp at the north end of the promenade.

In a recent council briefing document for councillors, the council acknowledged that the existing sea wall and boulder protection along the promenade have proven to be inadequate to prevent wave action overtopping the structure during extreme storm events.

This has led to extreme flooding in the car park and adjacent properties and damage to buildings in the front of the promenade.

The works have four main aims – to protect human life, to protect public facilities and private property in Lahinch, to allow future development of the area and to avoid a repeat of the damage to the coastal infrastructure in 2014/2015.

Councillor Bill Slattery said the regeneration and improvement programme along the seafront would provide much-needed protection for one of Ireland’s most popular seaside resorts and focal points along the Wild Atlantic Way.

The West Clare Municipal District chairman welcomed the timeline of four months from commencement for completion of the project, which will see it ready well in advance of Easter 2017 and next year’s high tourist season.
He said the work would involve the transport of in the region of 850 loads of rock armour from Toonagh Quarry to Lahinch.

“Lahinch, along with many other areas along our coastline, suffered greatly due to the storms of 2014. I would like to pay tribute to the council management and staff, who worked tirelessly with the community and emergency services during those trying times and who since have put in place temporary solutions and repairs, following the tremendous damage done by those storms.

“I, along with my fellow councillors, have made numerous representations and applied pressure at Government level for funding to be released for projects such as this and I welcome progress at last.

“I am well aware that many other areas need investment and will continue to work night and day to ensure they will get it,” he said.