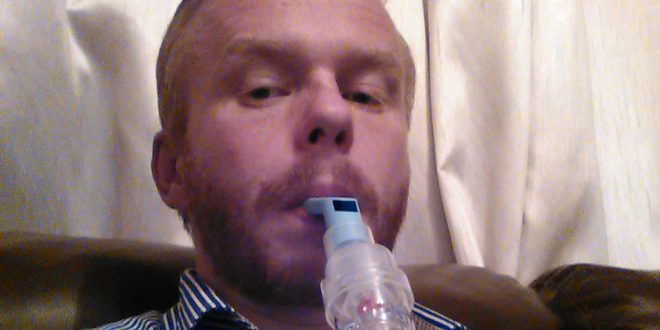 Robert Cook is in an every day battle with cystic fibrosis.

THIRTY-two-year-old Robert Cook from Kilrush faces an every-day battle with cystic fibrosis. He lives in the West Clare town with his wife Sandra and their two children and, on the surface, everything appears normal.

“We are an ordinary family that do the day-to-day things all families do. But the difference between my family and most is that I was born with an inherited life-threatening genetic disease. Cystic fibrosis affects the lungs, pancreas and most other organs in the body. The lungs are affected the most. Cystic fibrosis is a thick green mucus, which is produced in the lungs, making it harder to breath and also is a breeding ground for lung infections and inflammation,” Robert explained.

Every morning, Robert has to use a nebuliser before trying to get on with his day.

“My daily routine before I have breakfast or even a cup of tea involves having a number of nebulisers to work through, to help my lungs and the airways to clear. This can take between three and four hours daily, twice a day, 365 days a year; not to mention all the pills and injections throughout the day. There are times I still have to go to St Vincent’s Hospital in Dublin for IV antibiotics. This could mean a stay of two to three weeks at a time. Sometimes it’s like a revolving door with hospital admissions. I could spend two or three weeks in hospital, go home and two weeks later, I am sick again,” Robert revealed.

However, the arrival of a new drug called Orkambi on the market has give people like Robert hope that they might have a chance to live a relatively normal life. The only problem is that it is incredibly expensive and is simply out of reach of the vast majority of cystic fibrosis patients.

“Orkambi, which is made by pharmaceutical company Vertex, is the first of its kind as it treats the underlining cause of cystic fibrosis, unlike most drugs out there that only treat the symptoms. Orkambi will not cure cystic fibrosis but it will slow the progression of lung-function decline. This drug means fewer hospital admissions and a general all-round improvement in quality of life. It has the potential to add years to my life and the lives of hundreds of other people living with cystic fibrosis in Ireland today,” Robert pointed out.

A delay in the medication becoming available at an affordable price could prove too late for some patients, depending on how advanced their condition is.

“Orkambi will reduce the rate of lung-function decline but it will not undo the damage that has already been done to our lungs, so timing is everything. The price tag Vertex have placed on this drug is €160,000 per year per patient. The HSE and the Government have declined to fund this drug for people with cystic fibrosis and have said that they will enter into negotiations with Vertex. These negotiations have being going on for months now. People with cystic fibrosis have been left in the dark as to how these negotiations are going or if the Government and Vertex are any closer to a deal,” he observed.

Robert has contacted Health Minster Simon Harris and Clare’s four TDs in an effort to make it known to them how pressing the issue is and in the hope that they will help.

“All I get in reply is a general email that everyone seems to get if they raise this topic. I am aware that in France and Germany, people with cystic fibrosis have temporary access to this drug for one year, while health authorities in those countries negotiate with Vertex. People in Ireland were not afforded that luxury. I accept that this drug has a crazy price tag but negotiations should not take so long and people fighting cystic fibrosis every day should be updated on how things are going.

“I say timing is everything, as my own health has taken a hammering. I have lost almost 30% of lung function that I have not been able to recover. I know if I lose much more, this drug will be of no use to me and there are hundreds more in the same boat as me. This drug could be the difference between me seeing my son [aged four] and daughter [two] growing up. I am asking the Government to make the deal happen. Please don’t let it pass by for another year. I am also asking all local politicians to drive these negotiations forward and make the deal happen,” Robert concluded.