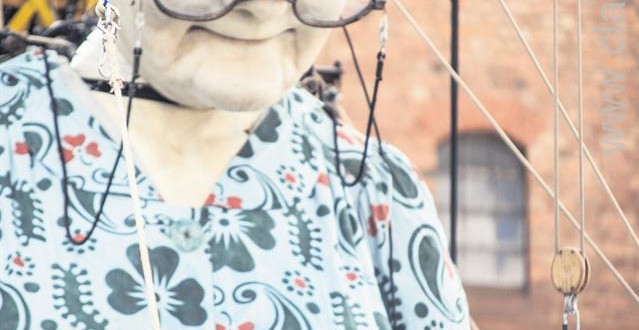 A GIANT granny comes to Munster this weekend as world renowned French based street theatre company Royal de Luxe bring their newest giant to Limerick as part of the city of culture line-up.

Founded in France in 1979 by Jean-Luc Courcoult Royal de Luxe have performed in front of more than 18 million spectators across the world and this weekend they bring their 30 foot tall Grandmother to Limerick.

From Friday, September 5 to Sunday, September 7 they will be in Limerick where they will deliver a unique Irish urban tale, bringing their Giant’s Saga to Ireland for the first time. The Giant will tell a story while she is in the city over three days offering plenty of free family entertainment. Grandmother, which is being referred to locally as Granny, stands at 7.5metres tall, and is handled like a marionette by tens of Lilliputians, which have become a directly identifiable signature of the street theatre company.

Speaking about the event Limerick City of Culture director and Sixmilebridge man Mike Fitzpatrick said they are expecting a huge influx of people into the city.

“We are delighted that this company which has attracted 18 million people worldwide to see them have chosen Limerick as being one of three places they are appearing in the world this year. Most recently they were in Liverpool in July and they attracted an estimated 1million people to see them over the four days they were there. The other location was in Nantes, which is where they come from. Next year they will be in Perth in Australia and then in Chicago 2016 so given the scale of what they do it makes it very exciting that they are coming to Limerick. We’ve speculated that the upper number would be 200,000 over the three days and realistically we are expecting about 60,000 to come to us on Saturday,” he said.

The entire city centre will be pedestrianised over the three days as Granny will walk a 19km route around Limerick over the three days, providing spectators with multiple opportunities to see her, while at the same time taking in what the city has to offer.

“She arrives in by train on Friday morning on a steam engine and she will be assisted off the train. She is about 30 feet high, when you take in the crane that helps her walk. She’ll go for a walk around on the Friday and she will take a nap in the middle of the day, because she and the French Lilliputians will get tired. When she wakes up then she goes for another walk around the town and will go to Sarsfield Barracks where she will sleep, and there will be a little performance there before she goes to sleep,” Mr Fitzpatrick explained.

As well as the French Lilliputians helping Granny there are also many local Irish Lilliputians who over the past week have been learning how to work with the giant.

Saturday will probably be her busiest day as she will offer opportunities for spectators over a full 12 hour period before she goes to sleep at Shelbourne Park close to Thomand Park that night. The park’s opening hours will be extended to accommodate spectators until 10pm.

“There is a massive attraction to the giant. Royal De Luxe have made many giants, the grandmother or granny as we are calling her is the newest giant and she is particularly charming. There is something magical that really grabs adults as well and they really get an attachment to her. She will be in her wheelchair some of the time and sometimes she will be walking. It is amazing to watch and to see the mechanic and human effort that goes into making her walk. She is also very responsive to the crowd, she’s very humanlike,” Mr Fitzpatrick said.

A full schedule of Grannys route, and park and ride, as well as park and walk options are available online at royaldeluxelimerick.ie and spectators are invited to gather anywhere along her planned routes.

Carol Byrne is a reporter at The Clare Champion newspaper reporting on news in the East Clare area and the arts. She also covers the courts in County Clare and has received seven national awards for this coverage from the Law Society of Ireland and a National Lottery Local Ireland national media award for Best Community Story 2019. A Masters in Journalism graduate of NUI Galway, she also holds a Bachelor of Arts from the University of Limerick in Music and Media Studies, and a Higher Diploma in Irish Legal Studies. She began her career interning at The Limerick Leader and Clare FM, before taking up a full time post at The Clare Champion in 2006.
@@Carlsburn
Previous Breen takes up mother’s call to combat racism
Next Spend some hours in the 12 O’Clocks