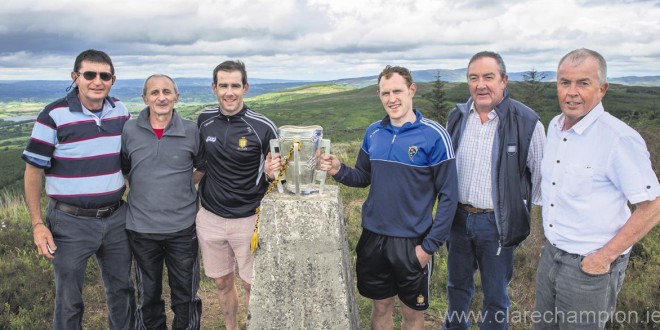 Spend some hours in the 12 O’Clocks

THE official opening of the 12 O’Clock Hills Project which has developed looped walks in these scenic East Clare hills will take place on Sunday, September 14 at 1pm.

The 12 O’Clock Hills recreational and heritage project is based at Knockanuarha hill, which is located 5km to the southeast of Kilkishen village. The main summit stands at 309 metres or 1,014 feet above mean sea level, and there is another peak about 10 metres lower and 400 metres away to the west/south west.

From the 12 O’Clock Hills much of County Clare is on view including West Clare, the Burren and the Shannon Estuary while locally Kilkishen village, Cullaun Lake and Steele’s Turret are prominent. With a little effort, the town of Ennis and many of the villages of East Clare will reveal themselves. With so much on offer from this vantage point the committee felt it was something worth developing on to share with the public.

The project was aimed at celebrating the heritage of the many hill dwellers who once lived in upper Belvoir, Crag and Snaty and provide safe and signed walking routes for recreational, heritage and scenic purposes.

On Sunday, September 14 the fruits of the local group’s labour will be launched starting at 10am with an 8km looped walk taking in the 12 O’Clock Hills. This will be followed by a 4km heritage looped walk at 11am. There will also be hymns with Kilkishen Church Choir at 12.45pm followed by a prayer service, blessing and official opening at 1pm. There will be light refreshments served from 12noon to 2pm.

Among the special guests for the event are Sean Hehir 2013 Dublin City Marathon winner, Patrick Donnellan Clare senior hurling captain and Conor Cooney,  All- Ireland hurling medalist in 2013.
Events will take place at the trailhead on the Belvoir/Crag forest road adjacent to Torpey car park.

As part of the project a range of walks has been identified to suit people of different fitness levels and interests.

Coillte has assisted the committee by granting access to the forestry and has also helped to open some new routes. With Coillte’s assistance the committee has developed additional paths under the trees and by the streams, which add to the charm of the area and provide access to heritage areas. John Torpey has provided a car park and Mike McInerney has given permission to walk by an upper stretch of the Crag stream.

There are two natural starting points for accessing the Knockanuarha area, one near Torpey Hurleys and the other at the bottom of the Snaty road. The walking routes being developed are mostly located in the townlands of Belvoir, Crag, Snaty Wilson and Snaty Massy.

Belvoir is low-lying on the banks of the O’Garney River and was the residence of the Wilsons, the former landlords of the area. Unusually, the Wilsons were Catholics. They became the Wilson-Lynchs when the family inherited land in County Galway. Crag is the next townland, which is somewhat higher than Belvoir.

“An extensive dry-stone wall was built of sandstone, the remains of which can still be traced separating the lower good land from the upper poor land. The selection of the walking routes was helped by the existence of a roadway, now in poor condition, running in a north-west to south-east direction between Belvoir and Oatfield. This roadway was built during the Famine to provide employment to starving people.

“Another road was started, running from Crag in a southerly direction towards Cooleycasey. This road was not finished. However, the track of the road can be seen and walked. On this road one can see, with difficulty, the ruins of a settlement cluster which once had 12 houses and two lime kilns,” Michael McNamara of the 12 O’Clock Hills Project committee outlines.

The present population of our area is about 100, with almost all living in low-lying Belvoir. In 1841, the population was 600. The last four families moved out in the 1970s and the location of three of these houses are on the walking trail route and may be visited. Since then the fourth house has been restored and has been re-occupied.

A number of very enthusiastic volunteers including John Power, John Lyons, John Lenihan, Michael McNamara, Mike Hogan and Sean Hehir engaged in a number exploration trips in the area to identify suitable trails including potential heritage sites. Among the chosen spots which were visited were old homesteads, lime kilns, spring wells, Famine Road, stepping stones and the old paths that were used prior to the Forestry plantation.

“After locating the Famine Road we did searches along it where we located clusters of old homesteads, lime kilns and spring wells but unfortunately Storm Darwin of February 2014 did so much damage here that it made us abandon including the area in our walking trails for the moment at least. We had other excursions and one particular one that I can recall and maybe for the wrong reasons was in search of a mass rock that was presumed to be in the Knockanuarha area,” Patsy Neville chair of the 12 O’Clock Hills Project said.

Assisted by John Power, the group went in search of Mass Place, where they found a mass rock, which was found to have holes in the rock face which contained the remnants of burned out candles.

The very first committee meeting took place in Donnellan’s Kilikishen on Friday, January 25, 2013 and having elected a committee their goal was to develop the routes and to finance them. The very first event they held on the mountain was an open air mass celebrated by Fr Donal O’Dwyer on August 25, 2013.

Following over a year of planning, research and development, the committee will launch their loop walks. This week they are installing a map board at the trail head on the Belvoir/Crag road and six information boards are to be placed at the selected heritage sites. This signage will be both in English and Irish.

Work on improving the routes is ongoing and the committee continues to explore new routes in the area. A late addition has been the inclusion of a section of the Crag River with mini waterfalls and stone cut bridges.

“The success of our efforts is measured by the significant increase in activity in the area be it walkers, joggers or cyclists and we hope this will grow into the future,” Mr Neville concluded.

Carol Byrne is a reporter at The Clare Champion newspaper reporting on news in the East Clare area and the arts. She also covers the courts in County Clare and has received seven national awards for this coverage from the Law Society of Ireland and a National Lottery Local Ireland national media award for Best Community Story 2019. A Masters in Journalism graduate of NUI Galway, she also holds a Bachelor of Arts from the University of Limerick in Music and Media Studies, and a Higher Diploma in Irish Legal Studies. She began her career interning at The Limerick Leader and Clare FM, before taking up a full time post at The Clare Champion in 2006.
@@Carlsburn
Previous Giant Spectacle in Treaty City
Next Changes imminent to Fitzy’s backroom