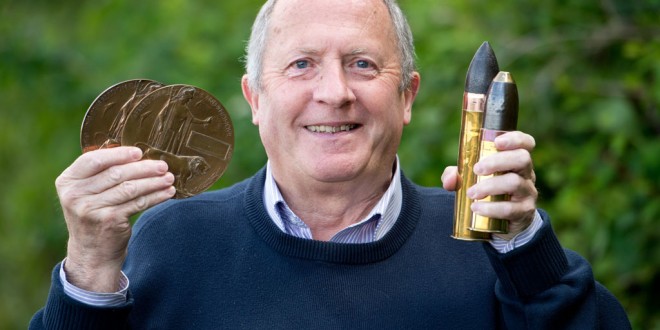 Eric Shaw with some of the World War I items that have been collected. Photograph by John Kelly

Gathering tales from the Great War

A HERITAGE project in Clarecastle and Ballyea has established that more than 100 local men served in the British Army during World War I, while a local historian believes there are at least the same number again of men from the area that they don’t know about yet.
The Clarecastle and Ballyea Heritage Group are continuing to collect stories about The Great War and parishioners involved and a number of people have come forward recently with medals, photographs and fascinating stories of their grandfathers’ roles in that war.
“We’ve been at it for the last couple of months; we’re trying to build up a database for people from the parish of Clarecastle and Ballyea of people who might have gone off to The Great War.
“We know the men who went off and were killed, we’ve plenty of information on them, but there’s a lot, we reckon from the parish, who went away and served, then came back and never spoke about it again,” heritage group member, Eric Shaw said.
“So far, I have a database of about 100 – about 30 of those were killed – but Joe Power, our local historian, reckons from a statistical point of view that perhaps up to 200 men from the parish were involved in The Great War.
“The project has worked reasonably well but we reckon there’s a lot more out there. Everyone has a medal stuck in their drawer. If you can get your hands on the medal, the person’s name and his regiment number is on the edge of it. Even last week I’ve got two of those and they have given us the story behind them.
“We have a monthly market in Clarecastle, which takes place this Sunday, and we’ve asked people to bring the medals and photographs along to the market and we’ll photograph and scan them there. Obviously, people don’t like handing over these medals and memorabilia, so if you can do it on the spot, it’s fine,” he said.
Anyone who has medals or other Great War memorabilia can contact Eric at 087 9791955 and he will arrange to have them photographed.
“We will be putting on an exhibition during Heritage Week in August and we hope to have many more by then,” he concluded.