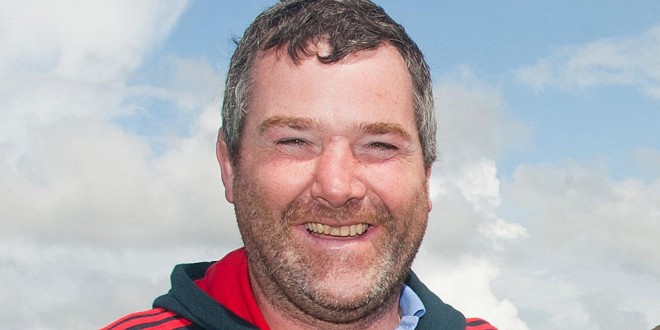 KILLALOE man Anthony Foley will take over as Munster Rugby head coach from July 1. He is currently serving as forwards coach under Rob Penney whom he will replace in the role.

Foley has signed a two year contract that will keep him at the province until June 2016.

The Clare man, who was capped 62 times for Ireland and 201 times for Munster, retired from playing at the end of the 2007/08 season. He joined the Munster backroom staff in July 2008 as technical advisor and assistant coach for defence. Since then he has held the position of head coach with both the Munster U-20s and Munster’s British & Irish Cup squad that reached the inaugural B&I Cup final in May 2010.

He moved on to his current position, Munster Rugby forwards coach, at the start of the 2011/12 season.
Additionally, the 40-year-old has experience at national level as the forwards and head coach for the Ireland Wolfhounds and forwards coach for Ireland.

“I am very happy to be selected as the next Munster Rugby head coach. It is a huge honour and privilege for me,” Foley commented, on the Munster rugby website, after his appointment.

“When I was growing up, my playground was Thomond Park that’s where I was every weekend and on Tuesdays and Thursdays. I was in there training so that’s what I know,” he added.

“I am very fortunate to have played and achieved success with this club, my home club, at the top level and now I look forward to leading the next generation of Munster players to future success in the red jersey. But before that we have a job to do this season and I will continue to play my part, working closely with Rob [Penney], Simon [Mannix] and Ian [Costello], as we push for titles,” the new Munster head coach noted.

West Clare native Peter O'Connell has worked for The Clare Champion for 12 years and covers everything from sport, especially GAA, news, features and has been even known to branch into the fashion scene on occasion.
@@westclarepage
Previous Dooley protests over haulage levies
Next Mulcahy labels his father ‘a bully’