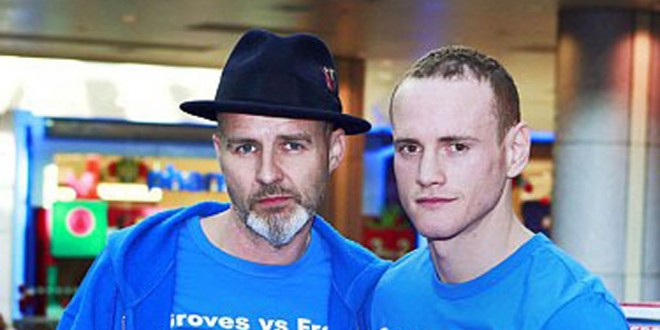 Fitzpatrick feared for his baby’s life

THE angst that boxing coach Paddy Fitzpatrick was putting up with on a personal level, even as he was doing everything possible to get George Groves ready for last Saturday’s WBC world title fight, must have been close to unbearable. As he worked in the gym, his newborn son was thousands of miles away, fighting for his life in a British hospital.

While there is still disappointment about last Saturday’s defeat to Badou Jack, he is very much looking at it in a bigger context this week.
“I came home last night [Monday] and met my child for the first time; he’s a month old and he was born while I was away. We came close to the fact that I mightn’t even be going to see him because he got very badly ill after two weeks, got taken into hospital and spent eight days there. I didn’t tell George he had been taken into hospital.

“He had Strep B and if you have it in your first week as a child, it’s easy to deal with but after the first week they call it advanced Strep B and that can be very bad, can lead to meningitis and lots of other things. My wife also moved house while I was away. I have a 10-year-old son and in those 10 years the most I ever spent away from him was one week and now I’ve missed his entire summer. My wife has a disease called lupus too; she had that pregnancy with lupus.”

His son is now at home and things are looking a bit better. With all that went on during the preparations, he is coping with the disappointment of last Saturday’s reverse fairly comfortably.

“Life goes on, brother, life goes on. I’m extremely happy, I’m blessed. I think I’m spoiled in life. I get to do what I absolutely adore for a living and life goes on. We’re in the fight game. It surprises me how many people go into total shock when things go wrong in the fight game. There’s two men in a ring; one of them is going to be extremely high, one is going to be very low but keep it in perspective.”

During one phone call he was hearing a running commentary on how his new arrival was declining, which was one of the low points.

“As I was talking to my wife on the phone, she said ‘he’s not good at all’. As I’m talking to her, he starts getting worse and then as she’s talking to me, she’s driving to hospital with him in the car. It’s close to midnight in the UK, around 4pm in America. I’m chatting to her and she’s saying things are getting worse and worse. Before the end of the conversation, she has to hang up on me because she’s about to walk into the hospital and I’m waiting for hours to hear what happened. Finally, when I did hear, it was ‘they’re keeping us in, they’re not letting us home, they might let us out tomorrow’. Then they didn’t let him out for eight days; they had to put a needle in his spine. It was hard, yeah.”