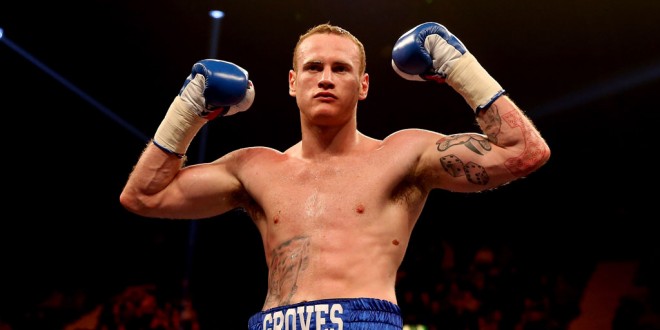 Groves can benefit from new coach

WHILE boxing coach Paddy Fitzpatrick still says he has the utmost respect for George Groves, he feels he has worked with him for the last time, following his third defeat in a world title fight at the weekend.

The first two defeats were to the legendary Carl Froch, the first an extremely controversial stoppage, followed by the famous Wembley grudge match attended by 80,000 and watched by millions on Sky, in which Froch knocked out the challenger with a massive right in the eighth round.

Groves regrouped with two victories but his coach feels coming back from last weekend’s defeat to Badou Jack will be the toughest test yet.

“He’s had to deal with a fantastic amount of stress and, I tell you what, I tip my hat to him for the way he has dealt with it. When you think of the stress of a man for his first world title in his own country, with 20,000 people booing him and slagging him off and telling him he’ll be sparked out in a round, for him to go in and handle that stress and turn the crowd on its head. For him to then go and sell 80,000 at Wembley and handle that stress. For him to then come back after that and fight Chris Rebrasse for the European crown just across the road from where he got knocked out. He’s handled stress exceptionally but Saturday night was a whole new thing for him; I’m not too sure how he’ll handle that.”

There has been little discussion between the two since the defeat but he was disappointed to see the fighter delete his twitter account, feeling it wasn’t the right thing to do given the thousands of supporters who followed it.

“Since the fight we haven’t really spoken, to be honest with you. His wife was with him [after the fight] and she was very upset and she wasn’t necessarily saying the right things to one or two of us around him so there was no point in us being in that situation where there was only going to be uncomfortableness and no chat.

“He’s deleted his twitter account now and, I hate to say it, but there’s that old saying of decide in haste and repent at leisure. It took him a lot of hard work over two years to build up those followers, I think he had a quarter of a million followers and that’s a lot of people who are mainly there to support you, enjoy what you do and like you.

“He has upset a lot of them because my twitter account has blown up with abuse. Why hasn’t he even said something to his fans that spent thousands of pounds travelling to see him and so on and so forth. You can understand that and I think he’s made that decision a bit too quickly. I hope he either realises it or somebody else catches him and says ‘George, slow down, go speak to the public, switch the twitter back on and say a few things’.”

Fitzpatrick has no doubt that Groves has the talent to become a world champion but says getting the mental side right might not be a simple thing now, after another defeat.

If Groves is to one day take a world title, it will be without Fitzpatrick, he says.

“It’s me that’s saying this now but if George was to come back, he would need, and I think it would be better, to be with a different trainer. We haven’t had a long career together, where you can say we’ve done A, B, C, been through C, D, E together and that’s it.

“We have been slagged off as a team from the very beginning. I’m an extremely thick-skinned man. I don’t care about being slagged off. I’ll take constructive criticism but just being slagged off, I wouldn’t listen to it anyway. But if George was going to try again and get it right the next time, it would only be fair to him and he’d only be fair to himself if he changed everything. He would have to be able to go into a fight and know if it went wrong the last time and the time before, now it’s all different; I’m giving myself the best opportunity.”

He feels Groves needs to change things, while he feels he needs to improve his relationship with the public too. With that in mind, he feels leaving the twittersphere was short-sighted, even if people were going to be posting stuff that was hardly helpful when he’s despondent.

“I’ve got nothing but full respect for the man, I’ve enjoyed our journey, even the crap bits, because we’ve been in it as a team and we’ve achieved a lot and overcome a lot. But he has still yet to achieve a goal that is physically and technically well within his grasp.
“Mentally and emotionally, I don’t know. He definitely needs a break and there would be no shame either in having a chat to somebody about it over time, somebody that could clear his head out.

“If George were to come back, he would need to come back and get the support of the people and I believe that little things like turning off his twitter account, I don’t think he understands how big a deal that is.

“Yes, twitter is only people’s opinions; yes, it is a lot of people’s vulgar opinions but you started your twitter account. You knew what twitter was like before you got on there. Now that you ain’t feeling good, you should just not go to your twitter account for a few months. Leave it alone, have a think about it for a few days or a week or something but to delete it the night you get home, you’ve got a long way to come back, man.”

Nice fella
He describes Groves as “a genuine, nice fella” and feels he got little credit from the boxing press over the last few years and that more should have been made of his second performance against Froch and his European title win over Christopher Rebrasse.
While he does sympathise with the disappointment Groves is feeling this week, he feels that when the bigger picture is examined, he is doing much better than most.

“I’d prefer people keep it a bit real too; we’ve just had a young man [super-featherweight David Browne Junior] with two children lose his life in this game in Australia only last night. George Groves is happily married, he has a beautiful home, a few million in the bank and he’s 27 years old and perfectly healthy.

“I feel gutted for him and I really hope you print it the way I say it please, I feel absolutely gutted for that man, but I don’t feel so bad for him that I think ‘oh my God, poor George’. I’m gutted for him, I’m gutted for me too. I’m part of that team too, it affects me too but keep it real. You’re healthy, you’re 27, you’ve got millions, you’re happily married.”

While he is preparing the Irish fighter Eamon O’Kane for a fight at Madison Square Garden, he is also coaching young people from very disadvantaged backgrounds at his Swindon gym, who help provide perspective also.

“I’m just about to walk into my gym; I’ve got kids from broken homes, kids who’ve got nothing and if they’re smiling, you know, keep it real.
“You have your private life and your boxing life, your boxing life you can be gutted in. What you’ve [Groves] achieved as a boxer, you didn’t achieve as much as you wanted to but it’s not necessarily over unless you say it is. There are lots of fantastic coaches out there; go change things, get things right.
“Technically, he has everything it takes; physically he has everything it takes, mentally and emotionally now I do believe he needs a coach to deal with some of the mental and emotional issues he’s had for the last two years.”