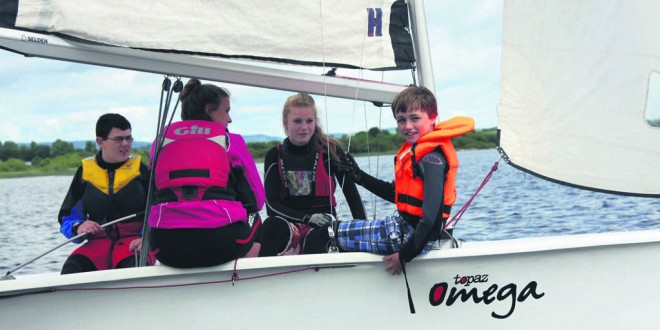 Across the three clubs there were over 40 junior sailors represented on the water for the day ranging from 10 to 18 years of age.

Commenting on the regatta Jim O’Sullivan of the Cullaun Sailing Club said, “this is the first time an event like this has been organised and judging by the skills and quality of the sailors it looks like it won’t be the last”.

This was a mixed fleet of boats with a Portsmouth Handicap being used to calculate the overall winner. There were Lasers, Feva’s, Visions, Omegas and RS200 boats all competing for line honours at the event.

Cullaun Sailing Club is currently running junior summer camps, which have led to the increase of activity on the lake, which is situated between Kilkishen and Tulla. It has an active junior and senior sailing squad that meet once a week.

Full details of the results are available on their Facebook page or by visiting www.cullaunsailingclub.com.

Carol Byrne is a reporter at The Clare Champion newspaper reporting on news in the East Clare area and the arts. She also covers the courts in County Clare and has received seven national awards for this coverage from the Law Society of Ireland and a National Lottery Local Ireland national media award for Best Community Story 2019. A Masters in Journalism graduate of NUI Galway, she also holds a Bachelor of Arts from the University of Limerick in Music and Media Studies, and a Higher Diploma in Irish Legal Studies. She began her career interning at The Limerick Leader and Clare FM, before taking up a full time post at The Clare Champion in 2006.
@@Carlsburn
Previous Academic links J.R.R. Tolkien’s writings with The Burren
Next Edna’s birthplace ideal as writer’s retreat