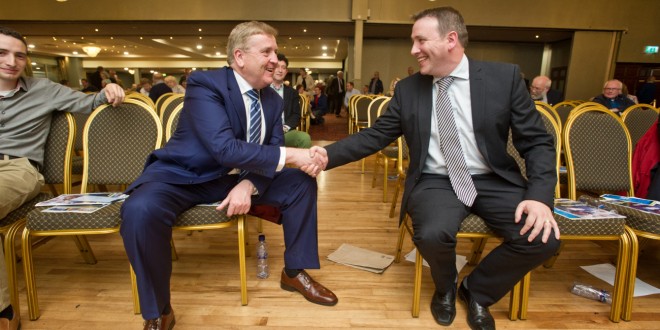 The two outgoing deputies were selected on the FG party ticket following a vote of 330 Fine Gael delegates in the West County Hotel, Ennis on Friday night.
Shortly after the convention got underway, chairman and MEP, Sean Kelly confirmed that Ger O’Halloran, who narrowly lost out on winning a seat on Clare County Council in the 2014 Local Elections, had withdrawn his name.
Having addressed delegates in a wide-ranging speech, Senator Tony Mulcahy withdrew from the contest and before voting took place it was confirmed Senator Martin Conway had also quit the race.
This left three candidates Deputies Carey and Breen and Councillor Mary Howard to battle it out for just two places following a directive from Fine Gael party headquarters for delegates to select two candidates on the night.
MEP Kelly announced that Deputy Carey and Breen would be the party’s two candidates in Clare at the next General Election.
Deputy Carey asked the chairman to read out the result but he replied this wasn’t the normal procedure and declined to read out the official result.
It is expected that a decision on whether the party will add another candidate in the Banner county will be made later this year.

deputies zoom in on constituents