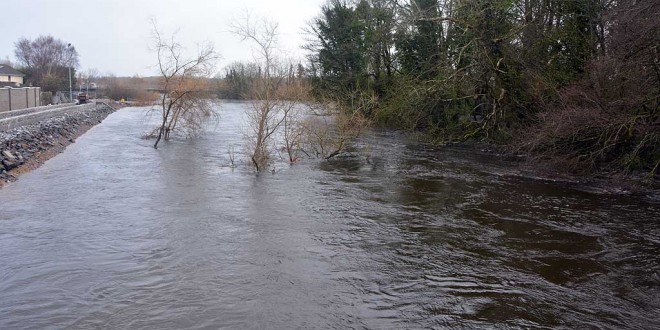 WHILE flooding has been reported to have receded somewhat in parts of North and West Clare this Saturday morning, severe overnight flooding was reported in Miltown Malbay, Liscannor, Mullagh, Quilty and Lisdeen near Kilkee.
Many other roads, while passable, were in a dangerous condition, including the Kilrush – Kildysart road, R473.
Fire service units from Ennistymon were called to a severe incident of flooding in Miltown Malbay, on the Lahinch Road and Church Road, where up to 20 houses were affected. Nearby manhole covers had burst due to the incessant rainfall.
Meanwhile two people were helped to safety from a car on the road between Liscannor village and the Cliffs on Moher on Friday night. Ennistymon fire service also attended that incident when the car became stranded as the road flooded.
Fire service units also attended a flooding incident in Mullagh, while several instances of cars being caught in floods, throughout West Clare, have emerged.
An Orange rainfall alert had been issues on Thursday by Met Éireann and further heavy rain is due to hit Clare on Sunday.
The inclement weather has resulted in the Clare minor B football final, Éire Óg v Kilrush/Killimer, being moved to Cooraclare on Saturday at 2pm. The game had been due to take place in Miltown Malbay.