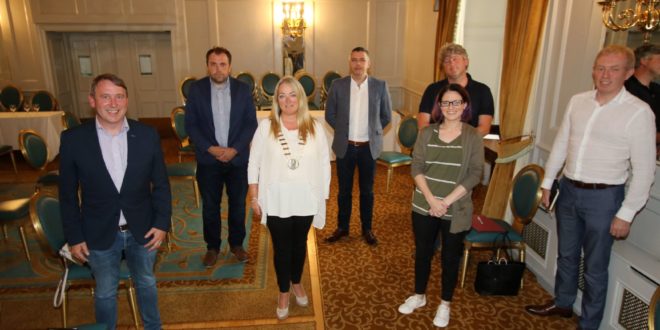 ‘Fear and despair’ of Clare publicans as Covid closures continue

“FEAR and despair” is impacting Clare publicans’ mental health as the closure of pubs and uncertainty over their re-opening continues, Clare Vintners Federation of Ireland chairman Darragh McAllister told a meeting this week.
The meeting of the Clare branch held at the Old Ground Hotel in Ennis saw six of Clare’s Oireachtas members hear the concerns of the county’s publicans. The meeting comes a week after it was announced that the re-opening of pubs that don’t serve food been delayed until August 31 at the earliest.
In attendance were Cathal Crowe TD, Michael McNamara TD, Violet Ann Wynne TD, Joe Carey TD and senators Timmy Dooley and Martin Conway and Mayor of Clare, Mary Howard with apologies from senator Róisín Garvey.
At the meeting, which was limited to 50 attendees as per Covid-19 regulations, Mr McAllister, welcomed the presence of the Oireachtas members.
In a wide-ranging address detailing the current state of the trade, Mr McAllister highlighted the many false starts the pub industry has endured and noted the affect which the current restrictions and lack of certainty has had on the mental health of VFI members.
“From inside our shuttered shopfronts we watch the rest of the nation return to work and play. Our office workers and dentists. Our physios and barbers. It seems you can pull a tooth, but you can’t pull a pint,” he said.
He continued, “It has been suggested that the reason the measures to combat the spread of Covid-19 are unfair is because the virus itself is unfair. This is wholly untrue. The virus is neither fair nor unfair. It simply is. It goes about its business without fear or favour. It is our response- as a community, as a nation and as an economy which can be judged to be either fair or unfair. In this regard our leaders have chosen the latter.”
Speaking about affect the closures are having on mental health, he said, “The impact this has had on the mental health of our members cannot be overstated. The fear and despair which keeps us awake at night greets us again at the foot of the bed every morning. Uncertainty is our constant companion. We need and we deserve some certainty. We need and deserve to know how and when we can resume trading. We need and deserve to know that until then our perfectly good businesses will be kept liquid. We need and deserve to know that those of us made unviable by measures put in place by government will be kept alive until those measures cease,” he said.
Deputy Joe Carey believes the “pub industry has been scapegoated” and there should be “no comparison between rural and urban pubs” and that financial supports should be “backed up” to cover the time pubs have been closed.
Senator Timmy Dooley said, “pubs should be open with restrictions for social distancing – pubs in rural areas are very different to city centre night clubs”.
Deputy Cathal Crowe suggested “pubs are the fall guys” and pledged to “fight the fight” on their behalf. He added that a formula, based on square footage of floor space, could be used to safely reopen pubs to customers.
Covid-19 Committee Chairman Michael McNamara TD reported that Ireland is the only country to have shut down its tourism sector and was “bewildered” with the approach of government, comparing the ongoing lockdown to the 2008 bank bailout.
Before the meeting ended VFI National Executive Committee member, Charles O’Meara, rounded on successive governments for their erosion of the ability of smaller pubs to trade.