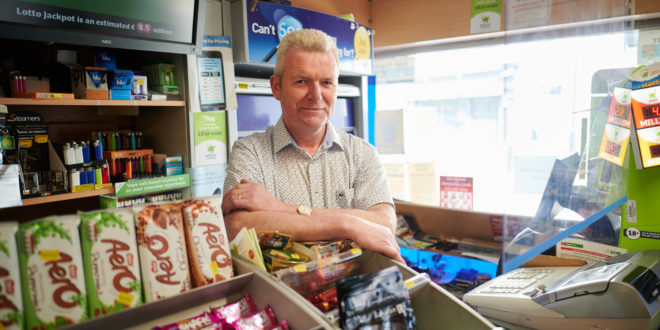 Gerry Connellan in his shop Abbey Newsagents in Ennis. Photograph by John Kelly

AN ENNIS newsagent has voiced his concern over recently-introduced pedestrianisation measures, which have blocked access for deliveries to his premises.

Gerry Connellan of Abbey Newsagents said that the erection of bollards close to his shop will make handling deliveries extremely difficult. The businessman, who has run the newsagents for decades, said he is able to manage currently – albeit with considerable inconvenience, but fears the impact of a spike in congestion from next Monday. The busy shop is located at the junction of Abbey Street and the Abbey Street car park, and relies on being able to receive deliveries seven-days-a-week.

“First of all, there are bollards outside the shop, so I have to drive up onto a kerb which is two or three inches high,” he outlined. “Access to the shop is essential for me, as it is for all of the traders on the street.” Mr Connellan also hit out at the lack of consultation on the process. “As far as I know, there was no consultation with anyone,” he said. “I only found out two or three days in advance by asking the council crews what was going on. And, on top of that, nobody from the council has asked me since how the new measures are working.”

Mr Connellan said he favours the idea of pedestrianisation in Ennis, in principle, and understands its importance in promoting social distancing. He said, however, he remains very concerned about the situation once Phase 2 of the re-opening of the economy begins, subject to government approval: “As far as I can see, it just won’t be workable from next Monday. It’s one thing to access the shop when there’s very little traffic. Once we return to more normal traffic volumes, things are going to be a lot more difficult.”

On May 20, to coincide with the first phase of the road map for re-opening the economy, Clare County Council introduced pedestrianisation and traffic re-routing. The Ennis Town Centre Mobility Plan is designed to facilitate social and physical distancing, and the local authority said it is continuing to work with stakeholders on the refinement of the plan over the coming weeks and months. The council has published details of the plan on its website and has advised members of the public to email customerservice@clarecoco.ie with any queries.

Fiona McGarry joined The Clare Champion as a reporter after a four-year stint as producer of Morning Focus on Clare FM. Prior to that she worked for various radio, print and online titles, including Newstalk, Maximum Media and The Tuam Herald. Fiona’s media career began in her native Mayo when she joined Midwest Radio. She is the maker of a number of radio documentaries, funded by the Broadcasting Authority of Ireland (BAI). She has also availed of the Simon Cumbers Media Fund to report on development issues supported by Irish Aid in Haiti. She won a Justice Media Award for a short radio series on the work of Bedford Row Project, which supports prisoners and families in the Mid-West. Fiona also teaches on the Journalism programmes at NUI Galway. If you have a story and would like to get in touch with Fiona you can email her at fmcgarry@clarechampion.ie or telephone 065 6864146.
Previous Councillor Norton expresses concerns over July Provision delay
Next Going From Strength To Strength At West Clare Sports And Fitness