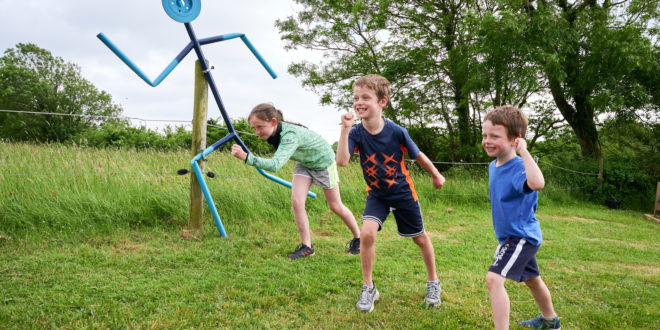 The latest phase of development at the Cooraclare based West Clare Sports and Fitness facility is nearing completion with a new covered sprinting section set to be unveiled in the coming weeks.

The brainwave to develop the cross-country course as a training base for local athletes was first mentioned in 2011, while the addition of floodlights four years later on a 1000m loop saw the creation of the West Clare Sports and Fitness to cater for the wider community.

Spokesperson Dermot Galvin outlined how the facility first got up and running.

“The idea for the project originally came about a time when I was dealing with a lot of injuries. I suggested to Joe Garry that our local club St John’s or even athletics as a whole in West Clare should look at buying land to develop a place to train. It was a passing comment but Joe suggested using his land in Clonreddan and we took it from there. We did the initial work that was needed to keep the animals off it so that a few local athletes could run on it. It was also for injury prevention for myself because at that stage I was still running at a decent level where I could compete at national events. It evolved one step at a time from there.  The first winter we held the Clare senior cross country championships and people told us it was a good place to train and suggested that we try to do more with it. The problem with training on a cross country course is that the time you need it most is during the winter and that would require lights. We decided from there to take that next step and in order to open it up to as many people as possible, we put in a 1000m floodlit loop on the course. That meant more people could use during the winter to get ready for cross country, or even those who just wanted to jog or walk” he explained.

It was a big undertaking to convert farmland into a specialised facility which would serve the needs of those using it. It took two years to get the track opened, and the initial work involved breaking through existing ditches in order to create the course. Galvin explained that the project opened on a small scale for the first few years, but credits the additions of the floodlit section in taking it to the next level.

“At this time of year it is mainly used by people just coming for a walk which is great. The reality is you are only going to have a certain age group who are going to be running competitively so what we are trying to do is develop a community facility where people can come to exercise. In one way, we are looking at developing a place where we can improve the standard of athletics in West Clare, but in another way it is about developing a place that anyone can use. That is the plan going forward. The West Clare Sports and Fitness club was always run on a non-competitive basis, but lately some of the younger members have asked can they represent the club in competitions this year. It is something we will likely allow this year, but the main goal at the start was to have a group to develop the place. The first few years it was just a case of using our own money just to get it open and it was only when the club was formed that we were able to go after grants. At the end of this year, there will be over €300,000 spent on it and without the various grants we have gotten, we would not have been able to achieve what we have. We would not have done that without the help of all the local people who fundraise for us and those grants which have been crucial along with our membership. The grants from the Department of Sport, the Tomar Trust, the JP McManus Trust and Clár funding have all been crucial for us” he noted.

Galvin’s own love affair with athletics started at an early age with the Kilkee native gaining a scholarship to Provedence College in Rhode Island after coming to prominence during his time in St Joseph’s Community College Kilkee. He identifies his time stateside as a pivotal few years in his progression as an athlete, which culminated in him gaining All American status as part of the team which took third sport in the US National Collegiate championships. It was his return to West Clare that would provide the first thoughts of the need to develop a training facility for athletes that would not take as much of a toll on the body as training on the road would.

“When I came home from America, I was always training on the road and I found it really hard to shake off the injuries I was picking up. I always felt that I needed to do more on grass but it was difficult to find the places to do that. I would run a bit on Doughmore beach or on Kilkee Golf Course when it is quiet, but going to Doughmore and seeing the tide is in or trying to avoid the golfers in the busy season was just not sustainable. I often met up with Seamus Power for training and we did long hard runs on the road that  might take in 15 or 20 miles which really had an impact on the body. I even find now that seven miles on the road will take its toll, but I could do 10 miles on the grass track no problem. Having that facility is really helping in that sense and people do tell us that they find it much softer than pounding the roads” he said.

With the cross country track now well established, the idea of incorporating an all-weather element was the next target the committee identified.

“The idea for that came about three years ago. We were hosting a local cross country event and as I was coming out from the track after, I met with Willie Keane. He said that he wanted to make a donation in order to help us out, so we started to talk about what we could do with that. It was decided that an all-weather element would be hugely beneficial and we came up with the plan to have it covered from the weather. It will be of help to a lot of teams in West Clare, particularly GAA teams because nearly every pitch around is closed in the winter. It is a five lane track for the 100m run with five meters at the start and 15m at the end to slow down” he explained.

He also challenged anyone who wants to try and break Usain Bolt’s world record to come and give it a go.

The development is not stopping there, as recent weeks have seen a number of features added to the 1000m loop at the track. Fairy doors, bird houses, and numerous flower beds are just a selection of what can be enjoyed, with Galvin emphasising the enjoyment it adds for those who just want to have a casual stroll around with the family.

The club are also running a scrap metal drive in a bid to raise more funds for the project, with anyone wishing to clear theirs out asked to contact any of the committee members.