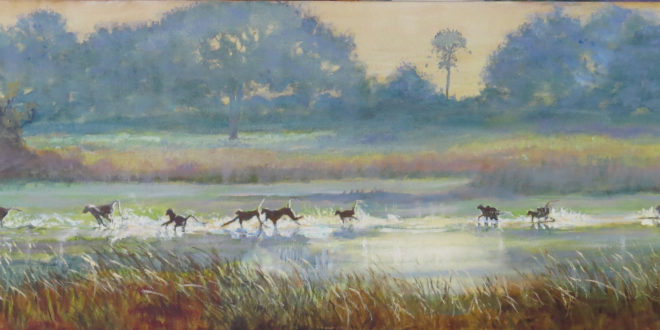 ENNIS artist Tomás O’Maoldomhnaigh has been shortlisted for a global art award. He is in the running to be named as the Wildlife Artist of the year 2020 for his painting
‘Rush Hour Okavango’.
In 2018 Tomás was lucky enough to explore Southern Africa, namely some of the national parks of Namibia, Botswana and Zambia with a quick visit to Johannesburg South Africa. In 2019 Tomás held a solo art exhibition in Limerick celebrating the nature and landscape of these marvellous wild places. The shortlisted painting was featured in this exhibition titled ‘Under African Skies’.
“Africa possesses beauty like no other land. There is a range of habitats and geographic locations from the swamps of the Okavango to the Namib desert,” he explains.
The painting depicts early one morning in the Okavango delta. “We travelled in the dark by dugout canoe to a riverbank. We could hear the screeching of the monkeys as they descended from the safety their roost high in the trees to the bank of the river. Their they all crowded together, screeched, pushed and shoved each other. The main reason for their anxiety was the many crocs in that particular area. Eventually one brave sole tore across the shallow river to the feeding grounds on the far side. Seeing him on the far side the others followed in groups at top speed until they were all safely across.”
The global art competition was open to amateur and professional artists alike. The response was phenomenal with nearly 1,200 entries received. The team at David Shepherd Wildlife Foundation were deeply touched by the time and creative thought wildlife artists have put into their entries and in doing so are helping save endangered wildlife.
The panel of judges spent hours discussing the entries and reported that the standard has been extremely high. Currently the exhibition is due to take place at Mall Galleries, London between Tuesday, May 26 and Sunday, May 31, with the Private View being held on Tuesday, May 26.
Now living in Ennis, Tomas was born in Limerick City in the ‘Parish’ and has been a continuous member of Limerick Art Society since 1977. He has held over 27 solo art exhibitions including one in the Limerick City Gallery of Art. He is a professional portrait and equine artist. He has co-produced two books including the bestselling ‘Discover Limerick’.