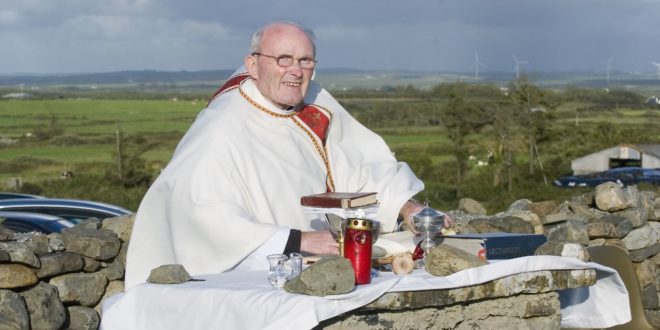 A native of Coolmeen, he was ordained to the priesthood for the Killaloe Diocese in the Church of St. Mary of the Rosary, Nenagh by Bishop Joseph Rodgers on June 16, 1957.
Fr. Joe was appointed to serve on a temporary mission to the diocese of Brentwood in England after his ordination where he served for six years until he was recalled to the Killaloe diocese and appointed curate to Kilmaley parish in October 1963.

Fr. Joe served the people of Doonbeg as parish priest from 1995 to 2008 when he became Priest in Residence and Administrator. He continued to actively serve as Assistant Priest in the parish since October 2009.

In June 2017, Fr Joe celebrated a Mass of Thanksgiving in the Church of Our Lady Assumed Into Heaven, Doonbeg for his 60 years of ministry.

He was also an honorary member of Doonbeg Golf Club and during the visit by US President Donald Trump to the Trump International Hotel and Golf Resort at Doonbeg slasty year he availed of the occasion to present a framed photograph of Doonbeg Castle to President Trump’s sons, Eric and Donald Jnr.

Due to the current Covid-19 restrictions, the funeral will be private for family members only.

To allow people to pay their respects, the funeral will travel through the parish on Sunday and people are invited to stand outside their own houses to ensure social distancing as it passes.  The approximate times are: Bealaha at 1.20pm, Doonbeg at 1.30pm and Clohanes at 1.40pm.

Fr Joe’s funeral mass will be celebrated on Monday at 12 noon and will be streamed live on the Doonbeg Parish Facebook page.

Doonbeg locals are ‘fond’ of Trump