Home » Sports » Do or die in Shannonside hurling derby 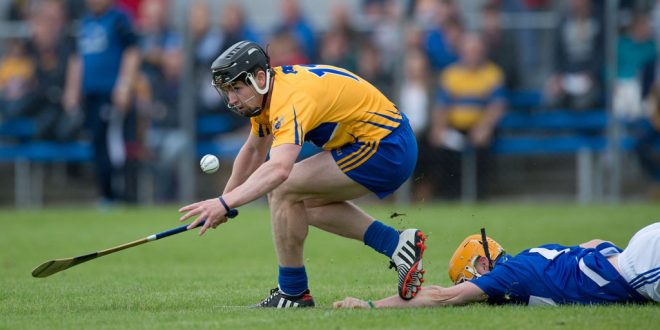 Tony Kelly in action against Cahir Healy of Laois during their All-Ireland Senior Championship Qualifier game in Ennis. Photograph by John Kelly.

Do or die in Shannonside hurling derby

Three of the players that filled key positions when Clare ensured promotion to division 1 A at the expense of Limerick as the end of March will play no part in Saturday’s qualifier meeting of the Shannonside neighbours at Thurles.

Conor McGrath, Conor Ryan and Pat Kelly are all out of action due to injury. McGrath, one of the game’s leading forwards, contributed 0-5 from play in that game and his absence is certainly a blow to clare hopes of beinhg involved in the latter stages of the championship. Both McGrath and Kelly are keeping their fingers crossed that they will be ready for quarter final action on July 25 as is Ryan but the defender/midfielder may have to wait a little longer b efore he is ready to return to action.

“Limerick won ‘t be afraid of us. It’s do or die now. We know the great young talent that they have. They have only been beaten three times this year”, Clare manager Davy Fitzgerald said, after news of the round 2 pairings had been confirmed.

Following last Saturday’s runaway win over Laois the Clare boss said he didn’t mind who his team drew in the next round. “Cork, Limerick and Wexford are all strong teams that have beaten us in recent times so we are facing a challenge and thats what we want”, he said.

The expectation is that an unchanged team will be named for the game, which has a throw in time of 7pm at Semple Stadium where it will be the third game on the programme, which gets underway at 3p.m. With the football qualifier clash of Limerick and Cork. This will be followed at 5pm by the meeting of Cork and Wexford in hurling. The winners of both of Saturday evening’s hurling games will progress to All-Ireland quarter final action against the beaten Provincial finalists from Leinster (Galway) and Munster (Tipperary or Waterford).

Should Clare win and should Waterford lose out to Tipperary in Sunday’s Munster final, then Clare will play Galway in a quarter final tie. The same scenario applies should Cork win on Saturday and Tipperary lose out to Waterford on Sunday as repeat pairings will be avoided.

It hasn’t been a good year for Limerick at senior hurling level. They failed to win promotion for the third year in a row before going down tamely to Tipperary in the Munster championship. Last week they struggled for long periods against Westmeath having played for over half of the game with fourteen men following the dismissal of Seanie O’Brien.

They have promoted a number of last year’s All-Ireland winning under 21 side this year and they will be hoping that these pla\yers will h ave benefitted from the experience they have been gaining. They are sure to be boosted by last week’s impressive wins by their under 21 and minor teams, bnotyh of whom progressed in their championship campaigns.

They are captained by experienced goalkeeper Nickie Quaid and they will also be looking to Na Piarsaigh forward duo Shane dowling and Kevin Downes, Dan Morrissey, Diarmaid Byrnes and Paul Browne to lead their charge.

There was good news for Clare fans this week as manager Davy Fitzgerald confirmed that David McInerney came through last week’s winover Laois without suffering a recurrence of the back injury which hass caused him problems in recent months. “He is fine”, the manager said on Monday. Its expected that the Tulla man will take up duty at centre back again this week.

Games involving Clare and Limerick tend to be closeand it is the end of the season for the loser, so its fair to expect a committed challenge from both teams. Clare have been far more impressive this season, which should see them through to the next round.