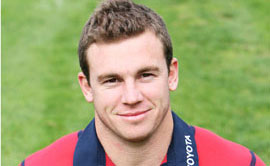 Chris Delooze is the new strenght and conditioning coach with the Clare senior footballers.

Delooze aims to have Clare fit and ready for 2014

GROWING up in Sydney, Chris Delooze could not have envisaged that come 2014, he would be responsible for the physical conditioning of the Clare senior footballers.

Gaelic football didn’t register on his radar in those years. Ironically, even rugby was only an after-thought at that stage, as Delooze concentrated on swimming, winning two national medals in open water events.

One would almost need to sit down on hearing details of his training schedule as a young man.
“At that stage of my life, I was training 16 times a week. I was swimming every morning and had three track sessions in the middle of the day. Then I had training most afternoons and on a Saturday and race sometimes on a Sunday. That was through the summer. Rugby was a hobby during the winter just to keep fit,” Delooze told The Clare Champion this week.

A change of school edged him towards rugby, which ended up having a profound affect on his life thereafter.
“Rugby only became big when I changed schools and ended up captaining the first 15 at Scott’s College. Rugby was almost like a holiday camp when it came to training. It was only two or three times a week. I was influenced by a couple of good coaches at Scott’s College. Then I got looked at by Sydney University. They had a couple of good strength and conditioning coaches there as well. I got playing grade for them straight away. That’s where the rugby took off for me,” the now retired scrum-half explained.

Chris studied Human Movement Education at Sydney University, while he also made the national universities team, which toured Europe.
“The highest I got was first grade. I made the schools representative team but I never played for a province outside of that. I made the Australian Universities team which brought me over to this side of the world. We played against England, Wales, Oxford and Cambridge. I got man of the match against Oxford and it just so happened that the UL Bohemians coach was from Oxford.”

Chris had returned to Australia when he got a phone call from Declan Kidney, asking him was he interested in linking up with Munster.
“At the time I was sharing a house with Marcus O’Connell, Paul O’Connell’s brother, in Australia. It’s such a small world. When I got the phonecall, he was my confidante. He was the guy I asked did he reckon I should give this a go? He said ‘over you go’. I did a season where I was just training with Munster and playing for Bohs. It was one of Bohs most successful seasons. We just lost out on the last day against Cork Con to make the AIL final that year.

“The following year was when I got my Munster contract but, unfortunately, in my first game against Leicester, I did my knee. That was me for the season,” Chris said of  the 2007/2008 season.

He continued to play with UL Bohs for a period but has subsequently concentrated on establishing the Trifit gym and coaching.
Along with being responsible for the physical conditioning of the Clare footballers, Delooze is also head coach at St Mary’s RFC in Limerick and he also coaches at Glenstal Abbey.

While this season marks his first involvement with a GAA team, Chris has developed a respect and fondness for football and hurling since moving to Ireland.
“I was definitely aware of it. I’ve had a lot of GAA clientele, including Darach Honan and a few Limerick hurlers. Darach came into the Trifit gym because of his dad, Colm. I was working with him when he was coming back from his hip injury two years ago. I was very aware of the GAA, although I would have had more involvement in the hurling side of things,” he said.

Even before becoming involved with Clare, Chris felt his training and conditioning methods would suit Gaelic players.
“There was no hesitancy whatsoever. It was always going to be a challenge but I really wanted to see if my theories were right. The mentality of some of the guys, like Gary Brennan and Kevin Hartnett, the mental approach that these guys have is not second to a professional athlete. They’re more professional than some of the guys that are professional. They’ve really brought into it, they’re going for it and I hope they get what they deserve,” Delooze said.

He is enjoying working under the management of Colm Collins, who is joined by Paudie Kissane (coach) and Ger Keane (selector).
“Colm has 100% full faith in the people that he has got in the different positions. Obviously he has pulled me up when he has an opinion but, at the moment, I feel that he’s pretty happy with what I’m doing. He has left me be and he’s great to work with. He’s looking out for what I need and, in turn, the players will get what they need,” the Clare trainer maintains.

Delooze has had to get used to the fact that GAA mentors are generally fairly direct in their views and often don’t spare players in their analysis.
“Colm is unreal to watch when he’s going at the players. I haven’t experienced that type of managerial approach. It’s different but he does get a great response. I’d say even from underage, these guys have grown up with similar types of managers. There’s such thing as a GAA culture and a rugby culture. They can’t be compared,” Chris, who is about to start a Masters in Sports Performance at UL, has discovered.

On a general level, Delooze feels the new manager is trying to up the level of preparation as Clare seek to finally escape Division 4 of the NFL.
“I think he’s trying to change the way people look at Clare football by changing the way that the players look at Clare football themselves,” is how the Australian strength and conditioning coach puts it.

West Clare native Peter O'Connell has worked for The Clare Champion for 12 years and covers everything from sport, especially GAA, news, features and has been even known to branch into the fashion scene on occasion.
@@westclarepage
Previous Six-week timeframe for Doonbeg Golf Club sale
Next The private trail of storm destruction