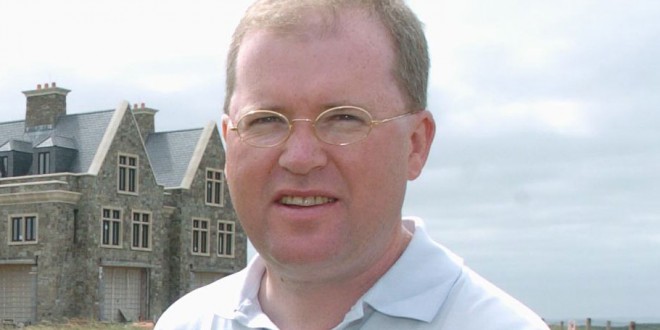 DOONBEG Golf Club general manager, Joe Russell, has been told by receivers that they hope to have a sale completed within a six week timeframe.

On Monday, Luke Charleton and David Hughes of Ernest and Young were appointed joint receivers to The Lodge at Doonbeg and Doonbeg Golf Club.
“Ernest and Young have said to us that they hope this process will take four to six weeks which, quite frankly, given other receiverships, is quite quick. There does appear to be an appetite from people involved to get this process done quickly,” Joe Russell confirmed.

“Approximately six enquiries have come through me for information on the purchase. I referred it on to Ernest and Young who, in turn, have a company that they’re working with in the USA to find the right buyer for here,” he added.

The general manager said he could not take a guess as to how much potential new owners might have to pay for the five-star resort.
“I don’t know what that value is,” Mr Russell replied.

The golf club and lodge is owned by South Street Partners, who purchased the resort from Kiawah Partners in 2013. The resort has yet to record a profit, while the most recent accounts (2011) show a loss of €6.4m, although revenue increased by 16% to €10.4m.  The golf club and lodge currently employs just under 100 people, while 240 were employed at the height of last summer.

Mr Russell says the issue that has caused problems for the company is primarily linked to the property market.
“We have seven unsold properties. Obviously, there were loans out on those for construction. We have what are referred to as ‘legacy property issues’. We had arrangements with particular people, which I can’t go into, which created difficulty for the business. The resort operation, which is the letting of the bedrooms, the restaurant, the spa and rounds of golf, have all continued to improve year-on-year. Like any business, all aspects of the business must be thriving and whenever there’s one that’s not, it pulls the rest of it down,” he stated.

“We have been just getting on with it. Thankfully, we haven’t lost any business. In fact, we got a deposit for a wedding on Tuesday. The bookings are flowing in for this year. Our expectation, prior to Monday, was that we would just continue getting ready for this summer. We were dealing with the erosion issue following the storms and then this came at us. We’re working with Ernest and Young on an ongoing basis. They’re looking for information and that’s what’s going on there. We have members and owners of the club who want to know what’s going on. I’m dealing with those calls, as are our colleagues. We took a proactive approach to our resort business, including tour operators, on Monday evening,” Mr Russell added.

After meeting with the receivers, Mr Russell then met with his staff.  “They had two primary questions – ‘what about our jobs and what about our pay?’ There was some questions about Ernest and Young’s role and what their expectations were,” he said, noting the staff’s ongoing performance could have a pivotal impact on the company’s future.

“It was like a half-time dressing room speech in so far as, if they fail to perform, what ends up happening is they damage the value to the business. People were very appreciative of being consulted, number one. Number two, is they need to keep going. Any pulling up on effort or performance will affect our year. If we get a new owner in and our first year is a bad performance financially, that’s not the start of a very good marriage. People understand that,” Mr Russell believes.

He subsequently met with his management team and with local community representatives.
“I had a meeting with the local community on Tuesday. I had about 25 people up and we talked about the receivership and the storm damage. I think it’s important that linkage continues between the golf club and the local community. Receivership has arrived at our front door. A lot of families and businesses have grown as a result of here. It does affect people’s lives,” he acknowledged.

Joe Russell is hopeful that the company can go to the “next level” when a new owner comes on board.
“I think there needs to be an expansion of the facilities. We have discussed meeting and event facilities in times gone by and leisure facilities, like a swimming pool, which our clients ask us for. Were they to be brought on line, I think they would enhance the business and the visitor numbers. This business needs vision, capital investment and it needs to go to the next level. We got a lot of things right but we just need to get going on the next stage,” he maintains.

“Normal operations will continue throughout the period of receivership. Things like suppliers have all been spoken to and have all got their cheques if they’re due, within our credit terms,” he pointed out.

Meanwhile, the recent storms have damaged the sand dunes on Doughmore beach, which the golf course backs on to.

“Where you had a sloping dune frontage, you now have a sheer dune frontage. It has exposed some irrigation pipes when it came back in towards the golf course. Over the next couple of weeks we’re going to have to take measures and discuss with the various experts to start the re-growth of these dunes. What they’ve done, particularly on the 18th fairway, it has made it about 10 to 15% smaller. But luckily we have 18 holes that are all playing,” he concluded.

West Clare native Peter O'Connell has worked for The Clare Champion for 12 years and covers everything from sport, especially GAA, news, features and has been even known to branch into the fashion scene on occasion.
@@westclarepage
Previous Sand disappearing off Kilkee beach
Next Delooze aims to have Clare fit and ready for 2014