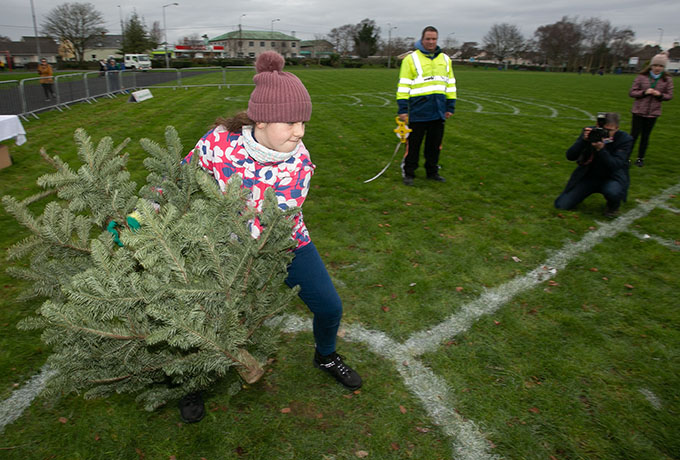 060119 Lauren O’Connor winds up for a big one during the Christmas Tree Throwing competition in The Fairgreen Ennis on Sunday.pic Arthur Ellis.

IT was a case of like father like daughter at this year’s annual Christmas Tree Throwing Championship. January 6 is the traditional time for taking down the Christmas decorations, and for the eighth year in a row that tradition has been taken to the extreme in Ennis.
Leaf-ing the festive season behind on Sunday, 150 people took part in the annual Christmas Tree Throwing Championship at Active Ennis Tim Smyth Park. Among those were father and daughter John and Lauren Leahy. John took the overall title of champion tree thrower for the third year in a row with an impressive throw of 7 metres. While his daughter Lauren followed in his family footsteps by winning in the under 14 category with a throw of 4.5 metres.
John, who competes in athletic throwing events, puts his success down to technique. “It’s great to have three in a row. It’s a very awkward thing to throw a Christmas tree, some people might think you just pick it up and throw it but there is a lot of things to consider such as the wind factor, surface ground and the tree varies every year. There’s aerodynamics involved. I’ve tinkered about a bit with different techniques, I do shot put, javelin and hammer and I compete at national level so that background helps a good bit.”
He said he was “very proud” of his 11 year old daughter’s win in the competition, and he believes that she might even have what it takes to attain the overall title in the future. “She loves doing it, she kept asking me when we were going to cut the tree to practice. She wasn’t off the senior level and she’s only 11, she just really likes it. I have another daughter who is ten and they love it. It’s a great family day out, there were 100s of people there cheering the competitors on and it was a great way to raise money for Cahercalla, the competition always raises money for good causes.” He paid tribute to Tim Forde and Mary Howard of Clare County Council for their work in the organisation of the event. He also hopes to return next year to compete again to retain his title.
According to organisers the event was a tree-mendous success. The event marked the conclusion of the Christmas in Ennis programme and there was certainly no pining as participants gave a heave-ho to 2018 in lumber jack style and welcomed the new year.
Taking the title in the U-10 boys category was Liam O’Neil with a throw of 4.7 metres; U-10 girls, Aimee Travers, 4.0 metres; 10-14 yrs boys, Odhran O Farrell, 4.86 metres; 10-14 yrs girls, Lauren Leahy, 4.50 metres; adult female, Mandy Murphy, 3.87 metres and adult male, John Leahy with 7.0 metres.
All contestants also had a chance to win a year’s family membership to Active Ennis Leisure Complex, with Paddy O’Reilly, Gort Road, Ennis the lucky participant.
Organised by Clare County Council, the 8th annual event is a novel way to turn Christmas tree recycling into a sport, while at the same time raise funds for Cahercalla Hospice. The championship, which is based on age-old lumberjack traditions, sees members of the public competing to achieve the longest distance for throwing a standard 1.5 metre tree. There were trophies for the longest throw in various age categories with a trophy for the overall champion.